Be Travellers is a company that offers tours in Central Asia. On their website, they show off the tours with video clips that make extensive use of Google Earth, such as the one here:


As you can see, the videos are very well done. While talking to Be Travellers about the videos, they offered to write a tutorial on how the videos are created, which I gladly accepted. Below is a step-by-step tutorial on how to create these videos, from Be Travellers director Mike Griffin.
——————————
We recently launched a travel company Be Travellers offering tours in Central Asia, (places like Tajikistan, Uzbekistan, Kyrgyzstan, Turkmenistan and the Wakhan Corridor in north eastern Afghanistan). As we were researching and travelling the region an issue came up again and again. People haven’t heard of, can’t place on a map, and don’t have any idea of what to expect in the places we want to sell trips to.
In the past I have used Google Earth to demonstrate to potential clients Central Asia’s position on the globe, and aspects of its geography that affect travel there. The idea for the videos came about as we were looking for a way to do the same for the people who discover us and Central Asia through our website, since many people like to do their research before travelling to different places, also there are other resources as this morocco travel guide if you want to visit this country anytime soon.
Each Video starts by locating Central Asia on the map, before flying through the route that people will take on each of our tours, interspersed with pictures of some of the things they are likely to see along the route. We have also put together a faster flowing video that gives a snapshot of some of the things that are available in Central Asia in general. We are pleased with the results and feel that they help people considering coming on our tours understand what to expect and, why it is such an amazing place.
The videos were put together using Google Earth and the standard software that comes with any Apple MacBook, with no previous experience in video editing. While how we did it is probably obvious to many of you, I thought a tutorial that shows how to achieve something like this for yourselves might be interesting for some.

To achieve our videos we used the video capture utility in Apple Quicktime to capture a fly through of pin drops in Google Earth. This video was then imported into iMovie, speeded up by 1000%, cut with images and text, before adding some of the free apple loops that come with Garage Band as part of the iLife suite.
I will go through step by step the creation of our Pamir Trekker video, that illustrates a trekking trip that we are running to a remote area of the Pamir Mountians in Tajikistan.
Step 1: Lay the route down in Google Earth
This was done using the “path tool”. We wanted different elements of the route to appear in different colours, for instance a part of the route that involves trekking to be different from a part of the route that is driven. The only way to do this was to create multiple paths. An odd quirk of the program seems to be that you can only edit or lay down a path with the “edit path” open, which makes working on a 13 inch screen, as we were, a little awkward. Another “quirk” seems to be that to access the edit edit path you right click on the path in the sidebar and click “get info”. “Edit path” would seem a more logical name to me! 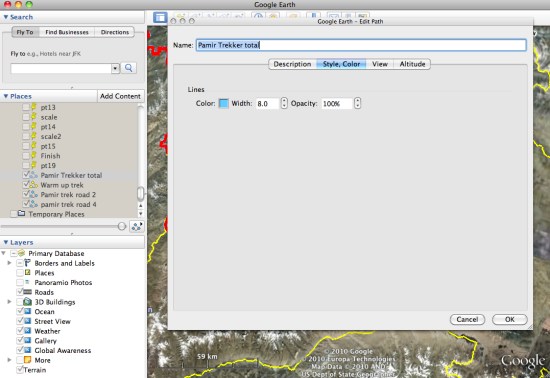 Step 2: Setting up the route “fly through”
I have seen some videos that use the “play tour” feature to follow a “path” the they have created by the above method. However we found this to lack the smooth motion that we were hoping to achieve with our videos. These The method that we used was to set out destinations along the route that we wanted the “camera” to fly to, using the “add place mark” feature from the top menu.

You again, fine tune its positioning by right clicking in the side menu and selecting “get info”.
When the place mark is in place, you need to set the view that you want to appear in the video. If you imagine that you are a film director viewing the earth through a camera lens, then this point is choosing the camera angles you are going to use. The easiest way to achieve this is to find the angle and height that you want to view the place park from, by using the zoom and rotation controls.

When you have got something that looks good, right click on the place mark you are setting up in the side menu and click “Snapshot view”. When you have done this, each time you click on that place mark Google Earth will fly to the point that you have snapshotted. 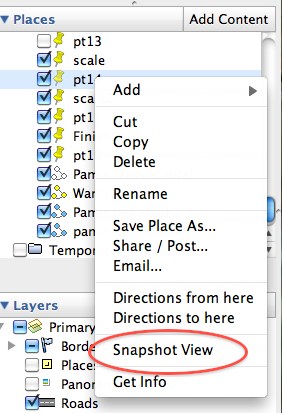 The rest of this step is just a question of doing this for each of the points that you want Google Earth to fly to.
The actual recording will be made by simply selecting the start place-mark, and moving down the stack that you have created using the arrow and enter keys on your computer, so it is essential that the place-marks are stacked in the order that you want your shots to appear in the video.
Step 3: Setting the “fly to” speed to slow…
For reasons that I will explain at the next step, the fly to speed must be really slow… You set this by clicking google earth in the top menu, and then accessing the preferences. You then find “Navigation” and adjust the Fly-To speed as low as you can stand. We used a speed of 0.0210. 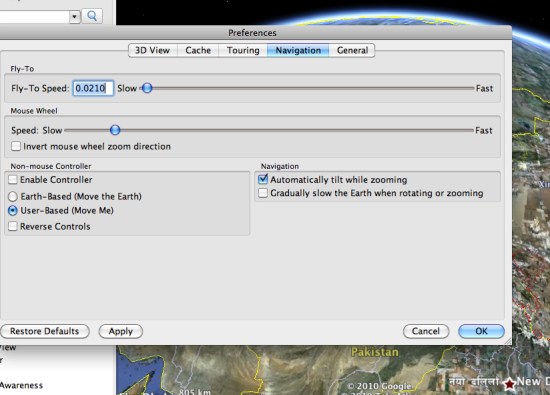 Step 4: Recording the route that you have set out.
Apple Quicktime in OS X 10.6 has a built in video screen capture feature, which is what we used to record the fly through. However it only manages about 15fps and uses a lot of system resources. Google Earth and video capture running at the same time, is at the limit of what my 2 year old MacBook can manage and when you are doing the recording the normally smooth motion of Google Earth, becomes far more jerky at higher Fly To speeds, hence slowing the Fly To speed right down. This is then speeded up later in iMovie, to reclaim the smooth motion.
i) First, load QuickTime player (version 10)
ii) Expand the Google Earth window so that the map fills the entire viewable area of the computer screen. You don’t want to collapse the side bar, so just move it off the left of the screen.
iii) Move the Google Earth window so that the side menu is visible again, go to QuickTime and select “new screen recording” and follow the on screen prompt to start the video capture. When it has started recording move back to Google Earth and select the place-mark that represents your starting point, and then move the Google Earth window again so that the side menu disappears of the side of the screen. to remove the place-mark ‘pin’ images from the map, simply uncheck them in the side menu.
iv) Use the arrow and enter keys to move from place-mark to place-mark. Be sure that Google earth has stopped flying to each place-mark before you move onto the next one. When you are done move back into quicktime and stop the recording. 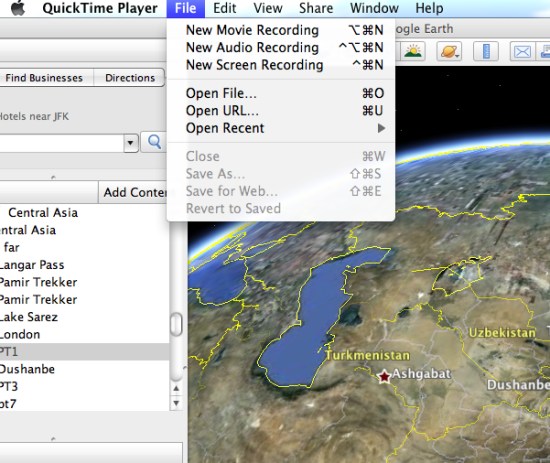 Step 5: Import and edit in iMovie.
I found Imovie to be a surprisingly powerful video editor, that is easy to learn.
I wont go through the whole process of creating a movie in iMovie because this is a Google Earth related post but the most important thing is, once you have selected the parts of the video you are going to use, to increase the speed. We used an increase of 1000%. Google earth provides great content, quicktime records it, and Imovie allows you to create a polished and professional finished product. 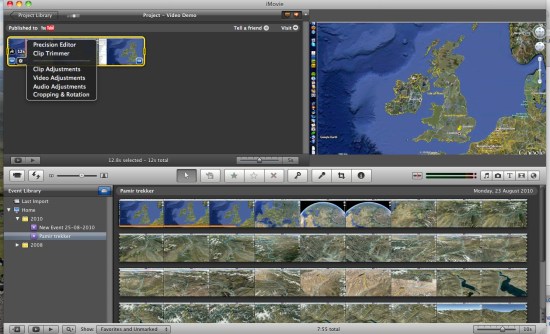 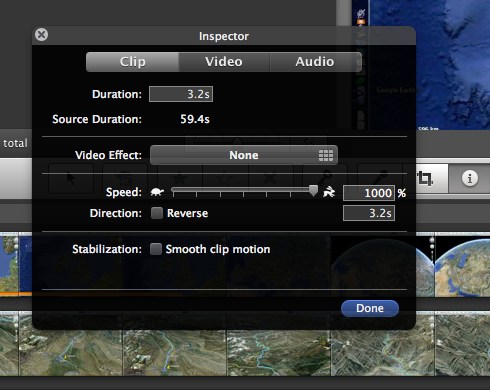 We have got the whole process down to about 4 hours start to finish… The biggest change we will be making for the videos for new tours on our site will be the addition of some different background music.
—————————————–
If you have any questions for Mike, or suggestions on how to further streamline the process, please leave a comment below. Thanks!