This is a question that we get asked a lot, so hopefully this post will help clear things up.
The short answer is that Google usually updates imagery twice a month, typically around the 6th and the 20th of each month. We highlight all of those updates on the site as soon as we’re aware of them, like the one we recently covered on September 21.
Each update covers a very small portion of the globe. For example, the United States might seen 4-6 cities updated, or perhaps a single state, and other countries receive similar minor updates. As part of each update, Google releases a KML file

that shows all of the updated areas with red outlines, like this: 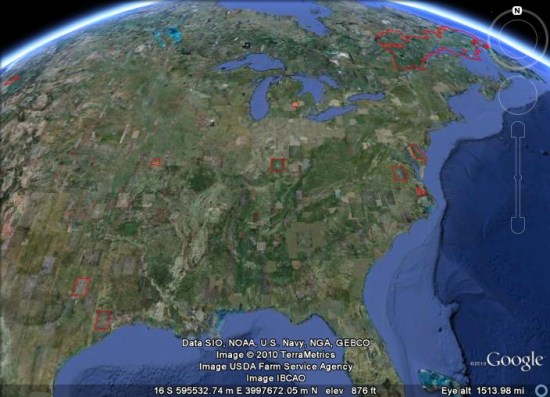 As a general rule, Google tries to keep every area updated to within around three years old, but that’s not always possible. However, if your area is more than three years old, it’s likely that Google is working on updating it soon.
That being said, we have no idea which areas will be updated next. We get a lot of specific questions such as “when will the imagery in Spokane, Washington be updated again?”. I promise you, we have no idea. The exception to that is when there is a major disaster, such as the earthquake in Haiti or the wildfires in Boulder, Colorado. During and after an event like that, Google posts fresh imagery as quickly as they possibly can to assist in providing useful information to emergency workers and concerned residents of the affected areas.
Lastly, don’t forget about the historical imagery. We recently showed you how the historical imagery is often fresher than the default imagery, so if you want to see the newest imagery of a particular location, the historical imagery tool might be your answer.
If you’re curious about the process used to capture and present the imagery in Google Earth, this detailed post that Frank wrote last year will be very helpful for you.