Google has just released a very impressive tour showing the potential repercussions of the proposed Belo Monte Dam Complex on the Xingu River in the Amazon. The tour consists of a handful of 3D models, water animations, and a variety of other graphical elements to show the potential impact. 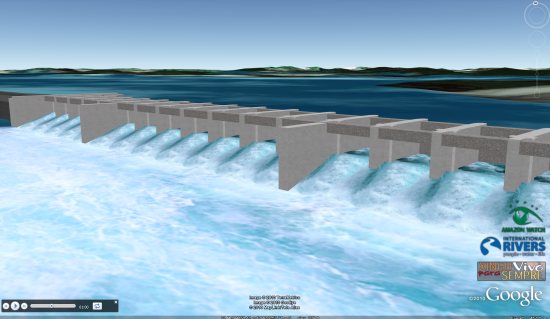 To be fair, Google makes it clear that they don’t necessarily oppose the dam, stating on their blog entry: “This is a complicated issue with many facets, and the views of this poster do not necessarily represent the official viewpoint of Google Inc.; we support the use of Google Earth for visualizations to create dialog.”
It is indeed an excellent use of Google Earth to show data in this way. You can download the full tour KMZ file

from the International Rivers site, or watch the video below:

For more information, check out the full entry on the Google LatLong Blog, or you can read the press release here:

SAN FRANCISCO, Aug. 30 /PRNewswire/ — Amazon Watch and International Rivers have teamed up to create a state-of-the-art 10-minute Google Earth 3-D tour and video narrated by actress Sigourney Weaver, with technical assistance from Google Earth Outreach, in support of Brazil’s Xingu River Forever Alive Movement. Download the tour or view the video on amazonwatch.org. The tour allows viewers to learn about the harmful impacts of, and alternatives to the massive Belo Monte Dam on the Amazon’s Xingu River.

If built, the Belo Monte Dam would be the third-largest hydroelectric dam in the world. The dam would divert the flow of the Xingu River, an important tributary of the Amazon River, in order to produce electricity for industrial mining operations in the region. The dam’s reservoirs would flood 668 square kilometers and displace more than 20,000 people. Late last week, the Brazilian government signed the concession to build the $17 billion-dollar project, ignoring local, national, and international opposition, proven financial and technical risks, and the ready availability of clean energy alternatives.

The tour and video, called “Defending the Rivers of the Amazon,” illustrates the impacts that diverting the river along a 100-km stretch will have on the two indigenous tribes who have lived there for generations. It also animates the flooding associated with the dam, impacts on the region’s spectacular biodiversity, and maps over 60 dams planned for the Brazilian Amazon over the next two decades.

The original concept for the Google Earth interactive tour and video emerged when Avatar director James Cameron and Sigourney Weaver traveled to the Xingu River in April, accompanied by Amazon Watch and the Brazilian environmental organization Instituto Socioambiental (ISA). After speaking with some of the indigenous tribes and riverbank families who would be directly affected, Weaver commented that the Belo Monte Dam would be “a disaster for the Xingu River, for the rainforest, and certainly for all the indigenous people and families living along the river. Their way of life will disappear.”