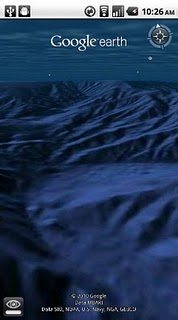 Roughly seven months after it was first introduced, Google Earth for Android has just received a major update to version 1.1.
The big update in this version is underwater bathymetry! This feature was first introduced on the desktop in Google Earth 5, but this is the first time that the bathymetry feature has become available on a mobile phone. It also includes a new “Explore the Ocean” layer that features photos and videos which share stories from the sea.
If your phone is running Android 2.2 (Froyo), there are even more goodies in this release:
• “Move to SD” is enabled, to free up some space in your internal memory.
• Some of the “Explore the Ocean” items have Flash videos in them, which can be viewed directly in the app thanks to Flash 10.1 being available on your device.
• Two-finger “look around” mode, similar to the iPhone. This has been my biggest issue with the Android version of Google Earth, as the iPhone version was much easier to use. It was apparently a firmware issue, since this only works on Froyo, but I’m glad to see it was finally added. This makes it much easier to browse around the globe. As suggested on Ogle Earth a while ago, simply turn the phone sideways and use both thumbs on the screen. It works great!
For more information about this release, please visit the Google Lat Long Blog.
If your phone is on Android 2.1 or higher, go download/update Google Earth right now. This is a superb update, and it’s well worth your time to get it. While you’re there, grab a copy of the free Google Earth Blog app so you can keep up with the latest GEB news on the go!