Archaeology Magazine recently wrote an interesting post about the the vast looting of Iraq’s archaeological sites. It’s a sad tale, with many of historical sites being simply destroyed by looters. 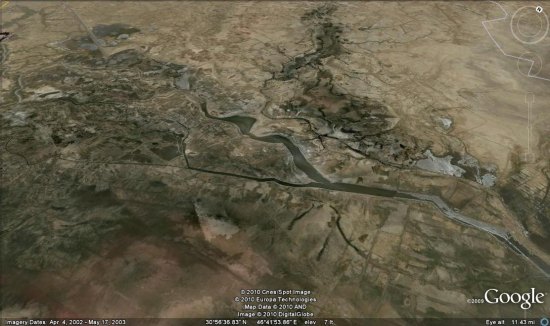 Elizabeth Stone, an archaeologist at the State University of New York at Stony Brook, has made extensive use of satellite imagery to determine the extent of the looting. Her work (and a subsequent speech at Stanford University) gained the interest of Daniel Contreras. He couldn’t afford to purchase expensive satellite imagery, but soon found that Google Earth imagery did the job. He started by studying looting in Peru, à la Stone, and published the results in a recent issue of Antiquity.
This led Heather Pringle, the Archaeology Magazine article author, to ask Daniel a question:

I asked him whether this might be the beginning of a much larger project, one that enlists the sharp eyes of the Google Earth community and anyone else with an interest in archaeology to keep an eye on the world’s looting hotspots. Could archaeologists crowdsource the monitoring of the our collective archaeological heritage?

“Definitely. The technology is all there, it’s just a question of how to administer it. And I think this would make people a little more aware of the problem of looting, as well as providing a tangible source of documentation for archaeologists.”

While this won’t directly help prevent looting while it’s happening (Google Earth imagery isn’t fresh enough), it could help highlight areas that have been recently looted and (as Heather said in the comments to her own article), “it gives archaeologists the necessary data they need to lobby hard for policy and legislative changes needed to crack down on looting.”
(via Ogle Earth)