Google has just released the newest version of Google Earth — version 5.2. This version is largely dedicated to supporting outdoor athletes and their GPS devices (hikers, bikers, runners, etc), but comes with a few other Goodies as well.
You’ve long been able to import GPS data to Google Earth, but 5.2 improves the way that it is handled and displayed. There are two main features that have been added to this version:
1. Tracks: Up to this point, GPS data had to be entered as either a series of line strings or hundreds of points. This new KML extension is a much smoother alternative, and is perfect for importing a GPS track. It contains all of the GPS data from your device; time stamps, lat/lon, heartrate, etc. The playback is similar to the “hundreds of points” display from before, but with a much smoother playback and a less cluttered KML file (both in the code and in the “my places” display).
In the past you’ve been able able to generate tours from your linestrings and point collections, and you’ll be able generate them from your new “tracks” as well.


2. Elevation Profiles: As part of this, you can now pull up an “elevation profile” of your track. This allows you to see the elevation gains/losses throughout the duration of your GPS track. If you want, you can zoom into a particular point in your track and just view that data (when climbing a large mountain, for example). Even better, the elevation profile can be generated from any linestring so you can use this feature on your existing KML files if you’d like. 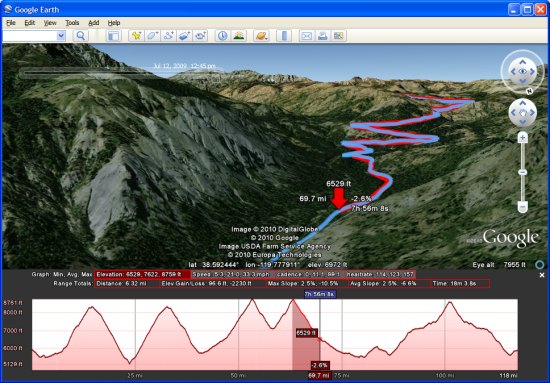 In addition to those changes, there are a few other goodies included:
Improved embedded browser. It’s based on webkit (similar to Google’s Chrome browser), and slides in smoothly from the side of your screen when you click a link that requires it. 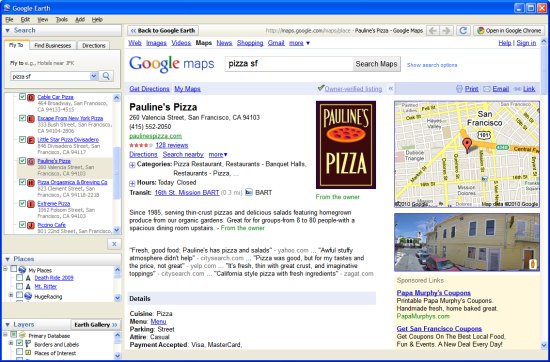 There are a few new enhancements to Google Earth Pro, including a better GIS import (improved UI, KML 2.2 compliant code, auto-regionation) and some cool new Pro-only layers such as US parcel data, demographic data and traffic count data. 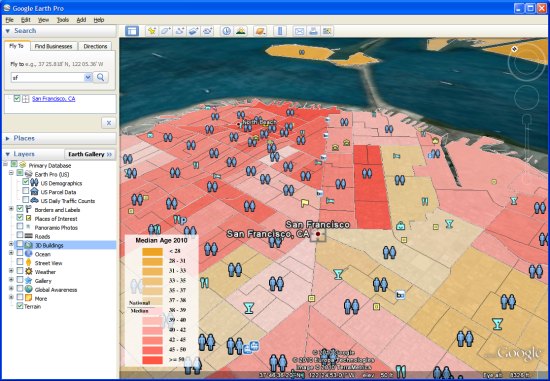 Lastly, the new version comes with an updated version of the Google Earth Plug-in. This new update to the plug-in includes support for the new Tracks feature, but does not yet offer the Elevation Profile. That’s expected in a future release, but no timetable has been given.
You can download Google Earth 5.2 from earth.google.com.