Having already covered the tallest buildings and the highest mountains in the world, I thought it’d be fun to look at the longest bridges.
For this list, we’re looking at the longest suspension bridges. I was a bit disappointed that a few of them didn’t have 3D models available yet (or even decent imagery), but most of them look pretty sweet in Google Earth.
1. Akashi Kaikyo Bridge, Japan — 1,991m — KML

The Akashi-Kaikyo Bridge, also known as the Pearl Bridge, has the longest central span of any suspension bridge, at 1,991 metres (6,532 ft). It is located in Japan and was completed in 1998. The bridge links the city of Kobe on the mainland of Honshū to Iwaya on Awaji Island by crossing the busy Akashi Strait. It carries part of the Honshū-Shikoku Highway. (wikipedia) 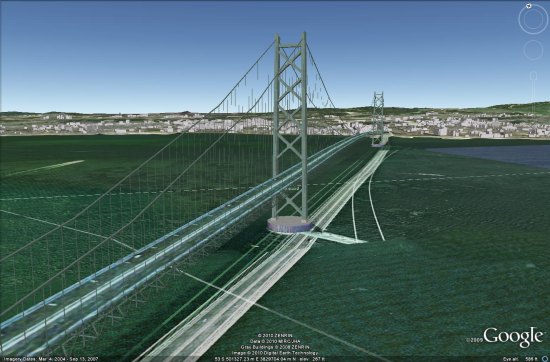 2. Xihoumen Bridge, China — 1,650m
The Xihoumen Bridge is a suspension bridge built on the Zhoushan Archipelago, the largest offshore island group in China. The main span was completed in December 2007. The entire bridge, along with Jintang Bridge, was opened to traffic on a test basis on 25 December 2009. The opening date was put off because of a ship collision on 16 November 2009 that slightly damaged the side of Jintang Bridge. (wikipedia)
3. Great Belt Bridge, Denmark — 1,624m — KML

The Great Belt Fixed Link is the fixed link between the Danish islands of Zealand and Funen across the Great Belt. It consists of a road suspension bridge and railway tunnel between Zealand and the island Sprogo, as well as a box girder bridge between Sprogo and Funen. The “Great Belt Bridge” commonly refers to the suspension bridge, although it may also be used to mean the beam bridge or the link in its entirety. (wikipedia) 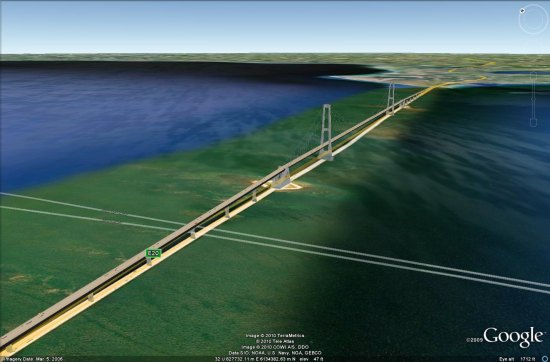 The Runyang Bridge is a large bridge complex that crosses the Yangtze River in Jiangsu Province, China, downstream of Nanjing. The complex consists of two major bridges that link Zhenjiang on the south bank of the river and Yangzhou on the north. The bridge is part of the Beijing-Shanghai Expressway. (wikipedia) 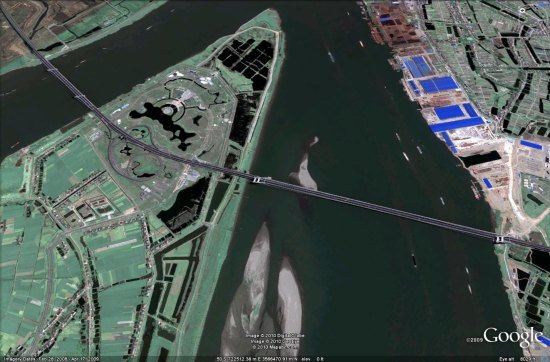 The Humber Bridge is the fifth-largest single-span suspension bridge in the world, near Kingston upon Hull in England. It spans the Humber (the estuary formed by the rivers Trent and Ouse) between Barton-upon-Humber on the south bank and Hessle on the north bank, connecting the East Riding of Yorkshire and North Lincolnshire. The bridge carries an average of 120,000 vehicles per week, which pay a toll of £2.70 each way for cars (higher for commercial vehicles). (wikipedia 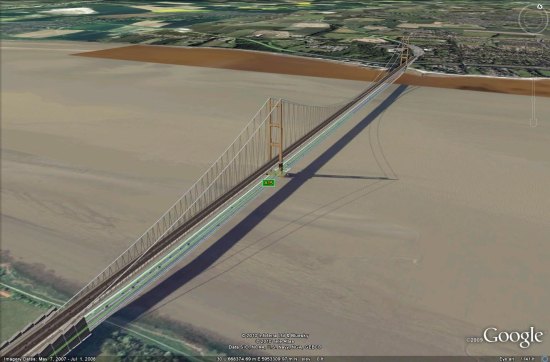 6. Jiangyin Suspension Bridge, China — 1,385m
The Jiangyin Suspension Bridge is the most seaward bridge to cross the Yangtze River of China. It connects the cities of Jiangyin and Jingjiang. The main span of the bridge is 1,385 metres meters long, making it the sixth-longest span suspension bridge in the world and the largest in China at the time of its completion in 1999. With the completion of the Runyang Bridge in 2005 and the Xihoumen Bridge in 2007 it became the third largest in China. (wikipedia)
7. Tsing Ma Bridge, Hong Kong — 1,377m — KML

The Tsing Ma Bridge is a bridge in Hong Kong. The bridge was named after two of the islands at its ends, namely Tsing Yi and Ma Wan . It has two decks and carries both road and rail traffic, which also makes it the largest suspension bridge of this type. The bridge has a main span of 1,377 metres (4,518 ft) and a height of 206 metres (676 ft). The span is the largest of all bridges in the world carrying rail traffic. (wikipedia) 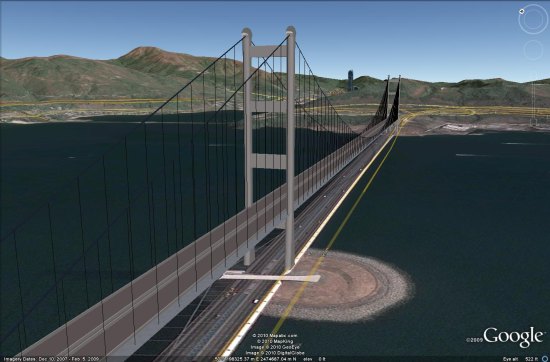 The Verrazano-Narrows Bridge is a double-decked suspension bridge that connects the boroughs of Staten Island and Brooklyn in New York City at the Narrows, the reach connecting the relatively protected upper bay with the larger lower bay.
The bridge is named for Italian explorer Giovanni da Verrazzano, the first known European navigator to enter New York Harbor and the Hudson River, while crossing The Narrows. It has a center span of 4,260 feet and was the largest suspension bridge in the world at the time of its completion in 1964, until it was surpassed by the Humber Bridge in the United Kingdom in 1981. It now has the eighth longest center span in the world, and is the largest suspension bridge in the United States. Its massive towers can be seen throughout a good part of the New York metropolitan area, including from spots in all five boroughs of New York City. (wikipedia) 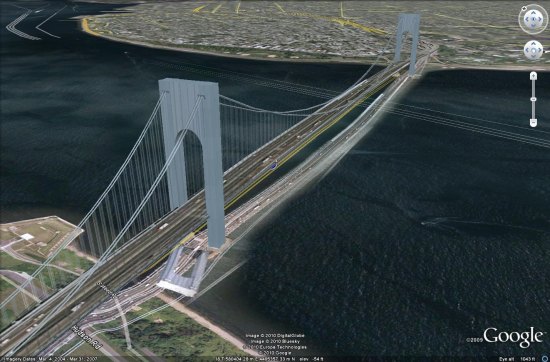 The Golden Gate Bridge is a suspension bridge spanning the Golden Gate, the opening of the San Francisco Bay into the Pacific Ocean. As part of both U.S. Route 101 and California State Route 1, it connects the city of San Francisco on the northern tip of the San Francisco Peninsula to Marin County. The Golden Gate Bridge was the longest suspension bridge span in the world when it was completed during the year 1937, and has become an internationally recognized symbol of San Francisco and California. Since its completion, the span length has been surpassed by eight other bridges. It still has the second longest suspension bridge main span in the United States, after the Verrazano-Narrows Bridge in New York City. In 1999, it was ranked fifth on the List of America’s Favorite Architecture by the American Institute of Architects. (wikipedia) 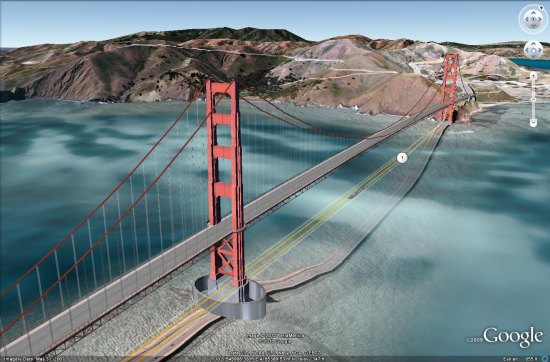 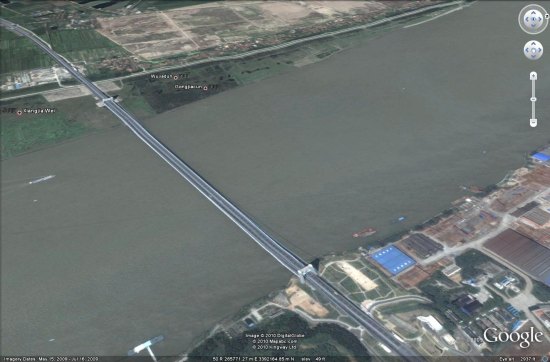