Since Google Earth was first released, a variety of people (including myself) have looked for ways to use it for gaming. While it will never be a true gaming platform, there are still some fun choices out there to play with. Here are a few of the best:
• The Flight Simulator: This was first unveiled with Google Earth 4.2, and it’s a built-in feature of Google Earth. You can fly as either an F16 or an SR22, and start from a variety of airports around the world. Press CTRL-ALT-A (or Command+Option+A on Mac) to get started. This video gives a nice overview of the controls:


• GEWAR: One of the first games people thought of when Google Earth came out was “Risk”. Playing that kind of game on the Google Earth platform would be pretty cool. It was something I chewed on for a while, but couldn’t figure out how to make it work. Eventually I discovered a way to create dynamic network links and I created “GE War” in mid-2005. It was mostly a proof-of-concept game, but it became quite popular. I eventually handed the game off to some of the more active players, and they’ve been improving it ever since. You can check it out at GEWar.net, where they have nearly 80,000 registered players. 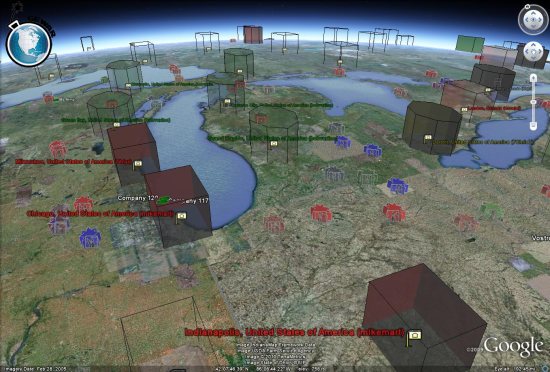 • Ships: Last year, PlanetInAction.com released a neat game simply titled “Ships”. It gave you the ability to take the helm on 3D ships, and was very well done. Here’s a video tour of the game:

Beyond those, there are a wide variety of other games you can play. A few more:
• GEMMO: A DND-style game.
• Mars Sucks: Blast aliens from your space ship.
• Milktruck Madness: Drive a milktruck around the earth. No scoring or lives (and really, no point to it), but it’s quite fun.
• Football: An American-style football game.
Do you know of any others we’ve missed? Let us know in the comments.