With Google releasing new 3D imagery almost every week, urban sightseeing in Google Earth is getting better and better.
Last month we mentioned the opening of the Burj Khalifa, so we thought it was probably time to look at more of the world’s tallest buildings.
1. Burj Khalifa: 828m KML

– 3DWH
Burj Khalifa, formerly known as Burj Dubai prior to its inauguration, is a skyscraper in Dubai, United Arab Emirates, and the tallest man-made structure ever built, at 828 m. Construction began on 21 September 2004, with the exterior of the structure completed on 1 October 2009. The building officially opened on 4 January 2010. 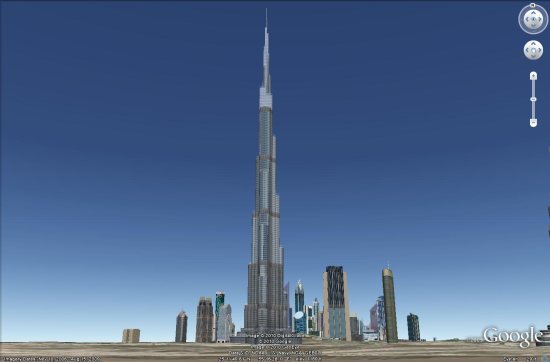 – 3DWH
Taipei 101, also known as the Taipei Financial Center, is a landmark skyscraper located in Xinyi District, Taipei, Taiwan. The building was the world’s tallest (with occupiable floors) until it was surpassed in height by the Burj Khalifa on July 21, 2007. The skyscraper was officially the tallest building until the opening of the Burj Khalifa on the 4th of January 2010. 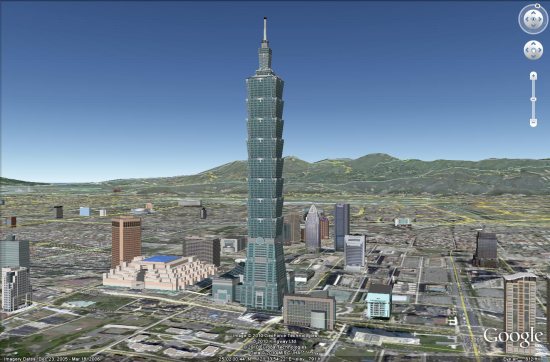 – 3DWH
The Shanghai World Financial Center located in Pudong, Shanghai, China. It is a mixed use skyscraper which consists of offices, hotels, conference rooms, observation decks, and shopping malls on the ground floors. On 14 September 2007 the skyscraper was topped out at 492.0 meters (1,614.2 ft) and became the second-tallest building in the world; as well as the tallest structure in the People’s Republic of China, including Hong Kong. 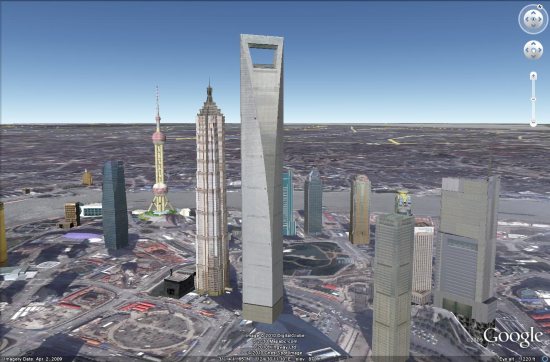 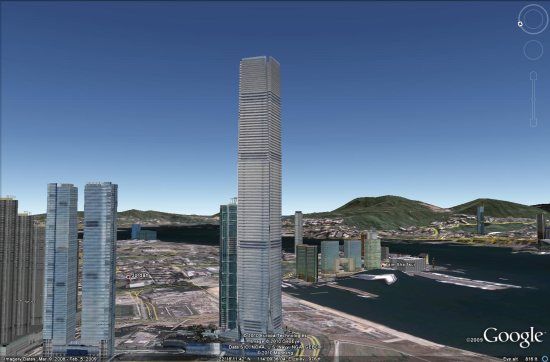 – 3DWH
The Petronas Twin Towers, in Kuala Lumpur, Malaysia are twin towers and were the world’s tallest buildings before being surpassed by Taipei 101. However, the towers are still the tallest twin buildings in the world. They were the world’s tallest buildings from 1998 to 2004 if measured from the level of the main entrance to the structural top, the original height reference used by the international organization Council on Tall Buildings and Urban Habitat from 1969 (three additional height categories were introduced as the tower neared completion in 1996). 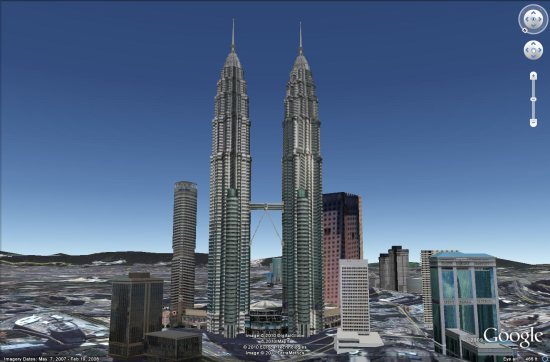 – 3DWH
The Nanjing Greenland Financial Center is a 450-metre (1,500 ft) supertall skyscraper currently topped-out in Nanjing, China completed in 2009. The 89-story building features office space and retail space in the lower section, and restaurants and a public observatory near the top, which is topped off with a spire. The tower’s stepping is functional, helping separate these sections. 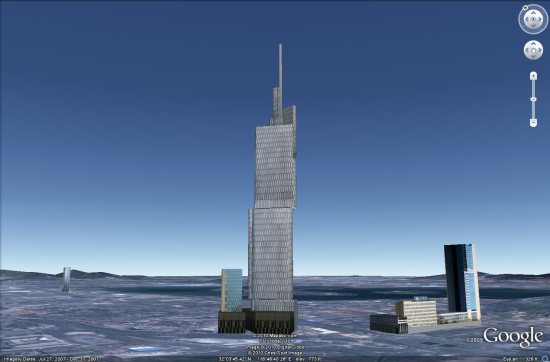 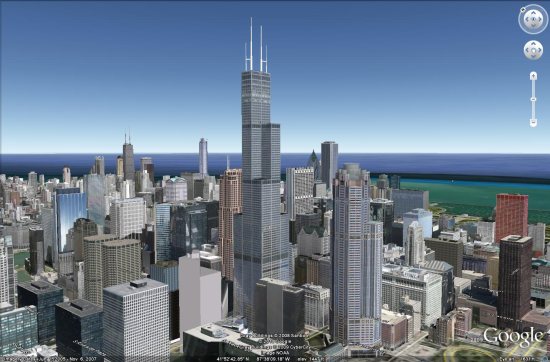 – 3DWH
Guangzhou West Tower is a 103 story supertall skyscraper under construction at Zhujiang Avenue West in Tianhe District at Guangzhou, China. The building was topped out on 31 December 2008. Construction of Guangzhou West Tower, designed by Wilkinson Eyre, broke ground in December 2005. When complete in 2009, the building and its twin will become one of the tallest highrise buildings in Guangzhou and China, and will be used as a conference centre, hotel and office building. Floors 1 to 66 are planned to be used as office, floors 67 to 68 are mechanical equipment, floors 69 to 98 as hotel and in floor 99 and 100 there will be an observation deck. There is a hotel lobby on the 70th Floor. 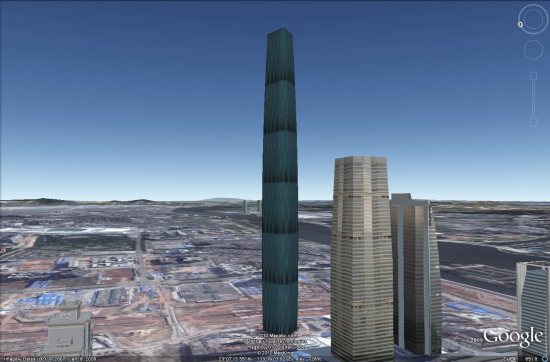 – 3DWH
The Trump International Hotel and Tower, is a skyscraper condo-hotel in downtown Chicago, Illinois. The building, named after real estate developer Donald Trump, was designed by architect Adrian Smith of Skidmore, Owings and Merrill. Bovis Lend Lease built the 92-story structure, which reached a height of 1,389 feet (423 m) including its spire, its roof topping out at 1,170 feet (360 m). It is adjacent to the main branch of the Chicago River, with a view of the entry to Lake Michigan beyond a series of bridges over the river. Trump announced in 2001 that the skyscraper would become the tallest building in the world, but after the September 11, 2001 attacks, the building plans were scaled back, and its design has undergone several revisions. When topped out in 2009 it became the second-tallest building in the United States after Chicago’s Willis Tower. It is expected to be surpassed by the 1 World Trade Center in New York City in the middle of 2013, and by the on-hold Chicago Spire if completed. Trump Tower surpassed Chicago’s John Hancock Center as the building with the world’s highest residence above ground-level and held this title until the completion of the Burj Khalifa.

– 3DWH
The Jin Mao Tower is an 88-story landmark supertall skyscraper in the Lujiazui area of the Pudong district of Shanghai, People’s Republic of China. It contains offices and the Shanghai Grand Hyatt hotel. Until 2007 it was the tallest building in the PRC, the fifth tallest in the world by roof height and the seventh tallest by pinnacle height. Along with the Oriental Pearl Tower, it is a centerpiece of the Pudong skyline. Its height was surpassed on September 14, 2007 by the Shanghai World Financial Center which is next to the building. 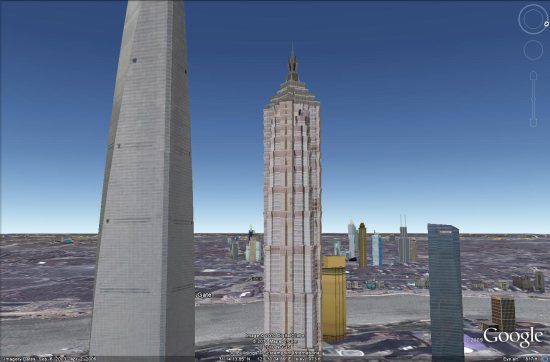