Though it may seem contrary to conventional wisdom, Google doesn’t always put the newest imagery in the main layer of Google Earth. There are numerous instances when you’ll find the newest imagery for a particular location in the “historical imagery” layer, while the default layer has slightly older imagery. For example, take a look at this golf course

just outside of London. The current imagery was captured on March 5, 2006, but you can find historical imagery of the same location that’s dated May 24, 2009. Why does this happen?

Frank discussed this briefly last year, but to really find the answer we need to go back to 2007 — two years after Hurricane Katrina struck New Orleans. Immediately after the hurricane hit, Google updated imagery of the area to reflect the damage, similar to what’s they’ve done recently in Haiti. However, in March 2007, people began to notice that Google “updated” the imagery of the area with pre-hurricane photos. People were very upset about this, and it quickly became a national story. 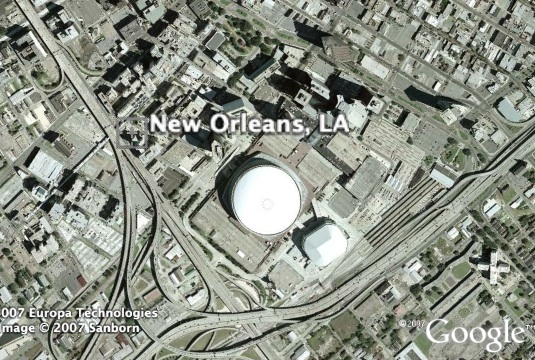 Google’s response was that “The previous imagery was directly after the storm struck, and was of inferior quality. Although the imagery of New Orleans is from pre-Katrina now, it is of better quality.” While that was certainly true, Google did the smart thing and restored New Orleans with post-hurricane imagery a few days later.

Google continues to use this method (best imagery in favor of newer imagery), though I’m sure they are more cautious about adjusting imagery for sensitive areas. The imagery in the current layer is always what they consider to be the best for each area — it’s often the newest, but it also has to look sharp, be as cloud-less as possible, and have the overall color closely match the surrounding area. If you’re looking for the absolute newest imagery for a particular location, be sure to check the historical imagery; it might have what you’re looking for.