In the days since the tragic earthquake in Haiti, many geo-related resources have been released. Here are some of the more noteworthy things we’ve seen:
[UPDATE – Jan 21 — Even newer imagery from Google, with incredibly high 15cm resolution in some areas]
Recent imagery from GeoEye
We mentioned it before, but felt it worth mentioning again. Google and GeoEye are working together to push out fresh imagery to a special layer in Google Earth and they’ve made it available a few different ways. You can download the KML file to view the imagery

, and now you can also access it via the “Historical Imagery” slider at the top of your screen. The file is constantly being appended with more data and imagery.
Interactive Imagery Tool from the New York Times
The New York Times has built a slick tool to highlight some of the areas hardest hit by the earthquake. It’s a unique and powerful way to compare “before and after” imagery, with various landmarks highlighted and explained. 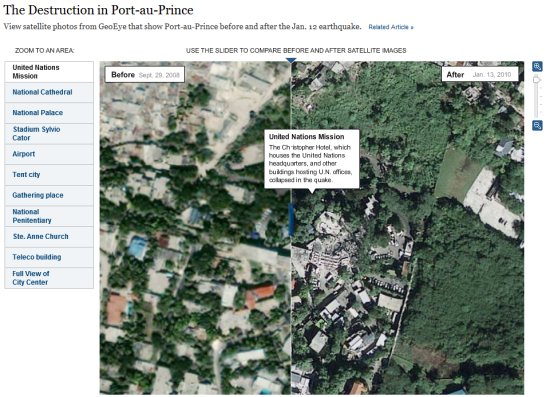 Massive Imagery Files for Relief Organizations
In addition to the updated imagery being provided for Google Earth, GeoEye is releasing massive high-res imagery files for relief organizations. These files are hundreds of MB in size, and intended for mapping professionals to assist in responding to the earthquake.
Staying Connected
Google is doing a lot of things to try to help people stay connected with loved ones in Haiti, such as offering a “People Finder” gadget to get people together, and offering free phone calls via Google Voice from the United States to Haiti. All of the details can be found here.
Bing Maps and Photosynth
Microsoft has built a Photosynth of some of the damaged areas of Port-Au-Prince. Photosynth is a neat way to view collections of photographs, though this imagery was collected from video footage and isn’t of the highest quality. 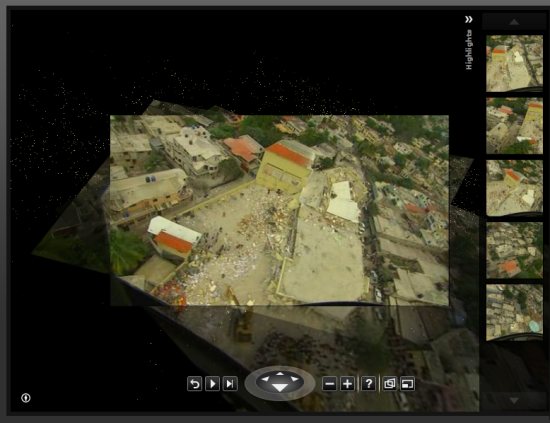 However, they’ve also added updated imagery to Bing Maps. Unlike Google, this imagery is part of the standard layer now, so you can simply fly there to see it. This makes it more easily accessible to people, but it eliminates the ability to compare before/after shots.
Open Route Service via Open Street Map
OpenRouteService is keeping an updated map of available street routes in Haiti. Due to the extensive damage, many streets are closed. This map can help authorities and rescuers to reach their destination as quickly as possible. Open Street Map is helping with the project. (link via Mapperz) 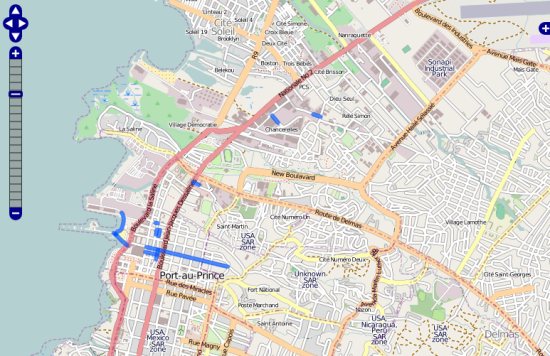 Do you know of any other great resources? Let us know in the comments.