Race My Race – Designed for athletes that want to visualize an upcoming event (running, biking, etc), this uses the Google Earth plug-in and gives you a test drive of your event. It has some slick features — an elevation overlay as you go, start/finish gates, easily controllable speed. The downside is that many places are just flat. For example, I had it simulate the Boston Marathon, and the first 90% of the race is useless — just flat scenery with a few hills. The end of the race (shown below) is kinda neat, with the 3D buildings all around. This simulator would do well to offer the option of StreetView, as that would make many of these courses much more lifelike. Still, it’s a neat project. (via All Points Blog) 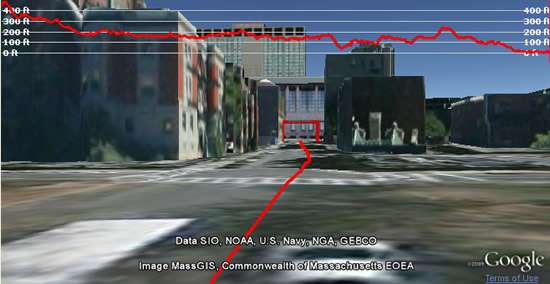 Random Hacks of Kindness – Google is partnering with The World Bank to host a codejam called “Random Hacks of Kindness”. As they explain: Random Hacks of Kindness will bring technologists and relief workers together to develop technologies that enable disaster victims to help themselves and give first responders and aid workers the tools they need to better help victims–to reduce loss of life and to speed recovery.
Google has built a variety of geo-related tools to assist after major disasters, such as Tropical Storm Ketsana, the Cyclone in Myanmar, and even back as far as Hurricane Katrina. The results of this gathering should help make these tools even more useful in the future.
DigitalGlobe launches WorldView-2 satellite – Just over a year ago, the GeoEye satellite was launched to provide exclusive imagery for Google. The WorldView-2 satellite was launched a few days ago aboard Boeing Delta II 7920, and promises to bring even more great imagery to Google Earth. You can read more on the DigitalGlobe site, or view the launch of the Delta 2 below: