A sharp-eyed GEB reader named ‘Will’ has discovered something pretty cool. At the north end of the Amsterdam Airport Schiphol, the Netherlands’ main airport, there is a 3D model of an airplane coming in for a landing. The plane was modeled by ‘KG800‘. You can view the plane using this KML file

. Be sure to have the “3D Buildings” layer turned on. 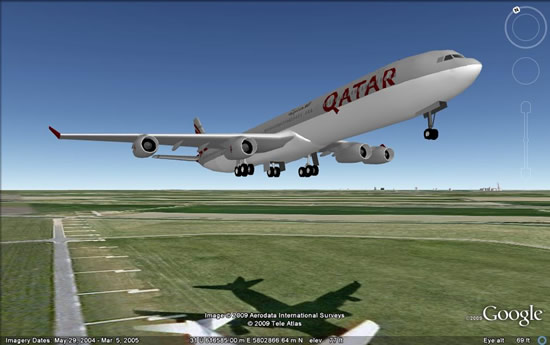 As far as we know, this it the first 3D plane included in the main “3D Buildings” layer. However, there are been plenty of planes added via third-party KML files before. There was a 3D Plane Tracker we showed a few years ago, the Wirefly X Prize Cup Event, and even an aircraft carrier that you can use with the flight simulator mode.
For normal satellite imagery of airplanes, you can browse this collection of planes in flight, a Lancaster Bomber from a few years ago, or a U-2 Spyplane discovered earlier this year. If you still want more, Google Earth Hacks has nearly 300 planes in their “aircraft in flight” category, and more than 900 “aircraft on the ground“. You can even find tons of aircraft in Google StreetView: 121 in flight, or 283 on the ground.
All of that being said, it’s still really cool to see a built-in 3D model of a plane in Google Earth. If you find others, please let us know.
[UPDATE 26-OCT: GEB reader ‘Tom‘ just let us know that there are a few 3D planes parked at London Heathrow. I’ve created a KML file

for you to check them out. Let us know if you find others.]
[UPDATE #2 26-OCT: GEB reader ‘Christoph’ pointed out that there’s a second plane at Schiphol that we missed. You can view it here