Cross-posted from the Tahina Expedition:
My wife and I are leaving in October to begin a five year sailing circumnavigation we are calling the Tahina Expedition. Our trip is not just about visiting remote pacific island atolls, sipping Coronas on the beach, and snorkeling around beautiful marine life. The Tahina Expedition also hopes to raise awareness about issues facing the oceans and the lives of those creatures and people who live in and around them.
One big issue is that mankind has for countless ages assumed the ocean is so big, that it can “wash away” our waste products and sewage. As human population has exploded, this approach could not continue. In recent decades, efforts have been made, by responsible governments and other organizations, to greatly reduce putting trash and untreated sewage into our oceans. In some areas of the world, beaches and marine life have actually recovered to some extent.
However, one very large related problem has only been introduced in the past century: plastic in the oceans. Plastic does not bio-degrade like many products. It does “photo-degrade” (due to the effects of the sun) to some extent over a long period of time (many years). Since the oceans are so vast, you would think it would take a LOT of plastic for people to notice the problem. Well, it has begun to be noticed.
There are vast currents in the Pacific ocean that keep the waters circulating. These areas are known as Oceanic Gyres. In the north Pacific Gyre there is an area that has become known as the Plastic Vortex – or the Garbage Patch. Here millions of tons of garbage (mostly plastic) have been accumulating for decades.

The Kaisei Project is sending two ships to the Plastic Vortex to research and take measurements on the scale of the problem. On their site, you can view a Google Earth plugin visualization showing the current positions of the two vessels and placemarks showing progress reports as they make their way to the vortex. Most of the placemarks contain video blog entries. 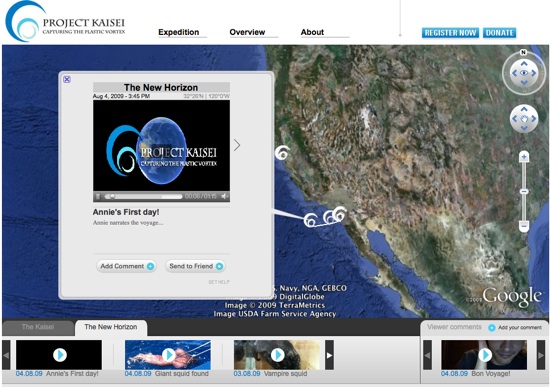 The issue of garbage in the ocean is already having a huge impact on marine life. Birds, fish, jellyfish, sharks, and other creature all end up consuming plastic particles. Many of them die because they can’t digest or are poisoned by the plastics. Some of these creatures in turn end up getting consumed by humans. So, not only are we ruining the oceans and marine life, but in a probably just twist of fate, we could be killing ourselves.
The Tahina Expedition plans to take note of trash, especially plastic, as we travel around the world on our sailing catamaran. My wife and I will begin the trip in late October and will continue for 5 years. You’ll be able to follow along in Google Earth, and we’ll be sharing a large array of photography including regular snapshots, underwater photography, HD video, and even aerial photography of places we visit which you’ll be able to view in Google Earth (thanks to our partnership with Google). We hope you’ll follow along on the Tahina Expedition Blog.