Monday is the 40th anniversary of the Apollo 11 landing on the moon. The day the “Eagle” landed. In order to help people understand the scale of exploration for each Apollo landing, NewScientist created a series of Google Earth maps to illustrate how far each Apollo mission went from the Lunar Module (lander). They then placed each of those maps overlayed on a familiar place on the Earth. You can view the Apollo missions overlayed in London

. Apollo 11, for example, barely covered half a block of Time Square in exploration range. By the time Apollo 17 finished, (using the Lunar rover) they were exploring a distance as far as Jersey City from Times Square. 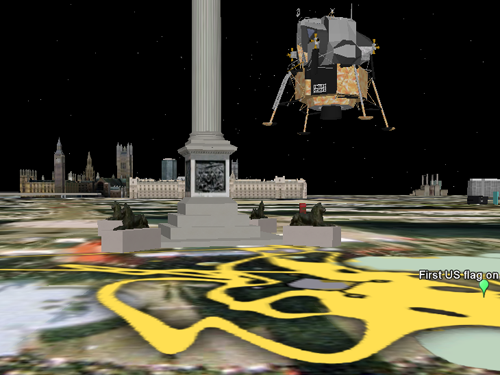 This week will be very interesting with the many retrospectives about the Apollo 11 landing. But, I’m most excited about the Google Earth “special announcement” on Monday with Buzz Aldrin speaking. Expect a big post about this on Monday when I expect Google will announce a 3D moon mode for Google Earth. In the meantime, check out Google’s current 2D Google Moon, which lets you explore the moon and Apollo landing sites.
In celebration of the 40th anniversary,NASA has a number of cool interactive sites about Apollo 11. They are even re-creating a simulated re-creation of the Apollo 11 mission 40 years later. We’re currently 55 hours from the “re-“landing of Eagle. You can even follow the “re-“landing on Twitter! For example, follow the communications from the Apollo 11 spacecraft. Or, you can watch an interactive site about the Apollo 11 landing.
There has also been attempts to clean up the video archives of Apollo 11 landing (the original tapes were accidentally erased). This segment shows Buzz Aldrin stepping on the moon in the original and then enhanced versions: