I’m on my way back from Washington, DC after attending the launch of Moon in Google Earth. Last night, I was able to attend NASA’s celebration of the 40th anniversary of Apollo 11 – which was held at the National Air & Space Museum. This was a big affair with hundreds of NASA employees and contractors, friends of NASA, and many astronauts including most of the Apollo astronauts. Google was there with a booth showing the new Moon in Google Earth. And, I got to see Neil Armstrong in person for the first time – he gave an inspiring speech. It has been great seeing all the enthusiasm in the last week in the media, on the Internet, and here in Washington for the Apollo missions. Especially for an old space enthusiast like myself.
Another great thing about yesterday was seeing all the enthusiasm on the part of the many Googlers who came here for the launch of Moon in Google Earth. It seemed most (if not all) of the team who worked on the project were able to be here. I saw over 20 Googlers at the event. They had obviously worked hard on the project – most on their 20% time. You could see how much they wanted the event to be a success. They were also eager for feedback on the GE moon and were quick to consider any ideas anyone suggested during the day. Obviously, there will be many more updates to moon in the future. The biggest updates will be in new imagery and terrain once the data gets back from the new Japanese and American missions. It’s a testament to the team that they were able to get so many NASA/space dignitaries to show up for the event. Watch a slideshow of photos I took during the two events:


View fullscreen
One thing I learned about yesterday – there are a couple of easter eggs in yesterday’s release. If you look closely, the icon for the “Gallery” layer is a piece of cheese. 🙂

And, if you play the Apollo 17 Tour to the point where Jack Schmidt talks about the Earth hanging over the moon – they placed the Earth in the Tour as a textured polygon. If you pause the Tour there. and fly yourself to the other side of the Earth polygon, you’ll see a funny moon cartoon: 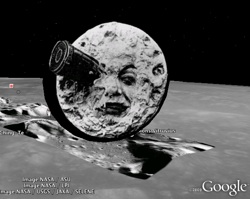