[UPDATE 9-June 2100 ET: Google has released details on this imagery/terrain update. As usual, GEB readers did a great job at finding places with new imagery. The only terrain added this time was for the state of Indiana.]
Google has quietly released a new imagery update for Google Earth. The first report came from GEB reader Martin F. followed quickly by GEB reader Alok P. Martin found some spots in France in the department Gard, and Normandy (Omaha Beach). Alok noticed a very recent GeoEye image (May 18, 2009) for Akola, Maharashta, India. [Correction First report was from GEB reader Alsay who left comments to yesterday’s drought post.] I guess we’re going to see more of this more recent satellite imagery. I’m wondering how much there is in this update?
The new imagery only appears in Google Earth at the moment. Google Maps is still showing what was current before today. So, you can click on the “View in Google Maps” button in the top center of GE to compare the current GE imagery to yesterday’s – this way you know whether it is new. If you find new imagery, please leave a comment to this post and I’ll update the list. I may not have time to verify all inputs, but hopefully those leaving comments will use the method above to verify before leaving comments.
Updates noticed so far [UPDATED 2042 ET]: 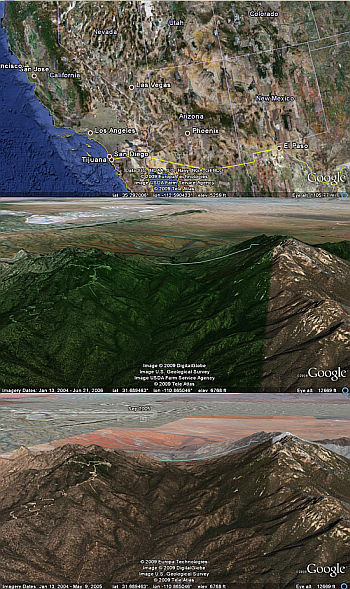 What I’ve noticed so far doesn’t make me too happy. Google for a while now (see New color imagery for Australia December 2008) has been re-colorizing imagery to make the Earth look more consistent from space (instead of all the different colored strips of satellite imagery). This time, I think they’ve gone too far. The western US has been re-colored and is too dark and too green in some places. I noticed this particularly in and around Tucson where I just recently went backpacking and touring around. I was just about to publish today some GPS tracks and photos of the area, but I’m too mad at the moment. The Tucson mountains are NOT green. And Mt. Hopkins is so dark you can’t even see the trails.

The images to the right (click for larger) are examples of what I’m talking about: The top photo shows how the southwest US now looks from space. The two lower photos show the mountains I was climbing last month – the first one is the new darker green, and the bottom one is what it looked like yesterday (much more like real life). Notice Mt. Hopkins on the left, Google even colored the roads and buildings (observatories) green. Yuck!
Of course, you can still turn back the clock with “Historical Imagery” and see the previous imagery. So, all is not lost. But, degrading the imagery and making it look false on the ground in the base imagery is not a good thing in my opinion.