Google Earth has been out for four years now. In June 2005, Google not only made a fantastic and invaluable resource free to the public, but since then has added amazing features and incredible data to the application. This blog usually sits in awe of the latest and greatest features added every few weeks, or even days. However, every once in a while Google goes down the wrong path with a feature or update. 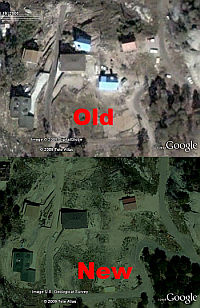 Today, I’d like to make a case that Google is going down the wrong path with their base imagery. Albeit with the best of intentions. They apparently would like to make the imagery when viewed from space look more normal (like you would see it from space). Google Earth’s imagery has always looked “mottled” due to the strips of satellite imagery having many different rectangular shades of brightness (since the imagery is taken at varying times of day and year). Correcting this look is something I’ve also pleaded for in past blog posts. But, not the way they are doing it now.
Lately, Google has been attempting to correct the view from above by fusing different colors of shading into the imagery and using color correction on the satellite imagery. For example, this was done with Australia in December, and this weekend the US has had some of the treatment. But, the problem with this approach is that the colorization sometimes messes up the quality of the imagery (painting not only vegetation green, but also buildings, roads, and everything else (see image to the right). See the example

in the screenshot here in Google Earth – turn on “Historical Imagery” option of GE 5 to see the two different shots. Not only that, but the colors are actually wrong in some places (like Arizona where they painted areas green that have no substantial green color in real life) – see the Tucson Mountains for example. However, I do approve of processing the base imagery for color saturation, brightness, and contrast consistency.

If Google wants the imagery to look better from space, they can use techniques built into GE to smoothly transition from one imagery set to another when zoomed in close. I suggested this back in 2006 and put up an example file and video using NASA’s Blue Marble imagery. Try it yourself here

. Note that the file shows the view from space for the current month (which changes the vegetation and ice/snow according to the season – see a time animation of all 12 months). As you zoom in closer, the imagery smoothly disappears to show the base imagery. And, Google doesn’t have to use the NASA Blue Marble I suggested. They can use their own desired look (such as their special colorization technique). The important part is that they can set things up so it smoothly transitions to the normal base imagery once a user zooms in closer to the Earth.
There has been debate about how best to approach the views from space. But, I think the current course of action – modifying the base imagery – is wrong. A layer you can turn on/off to change the view would be a better approach. And, the layer could offer different choices (Blue Marble, Google’s favorite view, and maybe others). In addition, the same layer could have the ability to turn on/off clouds. Ironically, the new historical imagery feature in GE 5 lets you see the Blue Marble imagery in lieu of Google’s base imagery if you select a time where they don’t have imagery. So, Google is already making use of the concept.
Recently I was re-visiting the Microsoft Virtual Earth/Live Maps/now Bing Maps (yet another name change). Their image sets change at different zoom levels, but I really do not like the transitions (very abrupt – not smooth in the 2D – a little better in 3D). And they have several different transitions (too many I think). You don’t see the better quality imagery until you are very close to the ground. Often, you don’t even realize they have high resolution imagery until you zoom to house-top level.
I certainly don’t want Google Earth to have lots of levels of transitions (and definitely not abrupt ones) in the imagery. But, the current approach Google has taken is certainly not acceptable (can you tell I’m not happy?). Maybe one or two levels of transition (in a user-selectable layer), would be a better approach. It could even be useful (if it showed different views according to season, weather/clouds, etc.).