In the past few years, commercial shipping vessels have been required to broadcast a vessel position “transponder” similar to those used by aircraft. The system used is called AIS (Automatic Identification System) and uses GPS for position data, but also broadcasts other important data such as ship name, course, speed, and more. The system allows vessels at sea to have a much better awareness of other ships and, in particular, helps avoid the potential of collisions as the seas get increasingly more crowded (especially in ports).
Some academic researchers have been running a web site called MarineTraffic.com that shows the positions of ships around many ports around the world. They rely on a community of data collectors who simply need an AIS receiver and an Internet connection to provide data on ship positions for a given port. A number of similar sites have offered such data on the Internet before (for example, I mentioned VesselTracker.com a couple of years ago). Some of the vessel position report sites are only available on a subscription basis. But, MarineTraffic.com is the largest collection of data I’ve seen and its available for free.
The current MarineTraffic map shows over 10,000 ships. The positions of the ships may be up to 1 hour old, but are otherwise near real-time. Their primary interface is Google Maps which lets you zoom in to see more detail, but only shows a summary of the position data when zoomed out. Clicking on a region zooms you in to show the vessel positions (and headings). Clicking on a ship placemark can give you all kinds of interesting information including a picture of the ship (if they have it), speed, vessel type, size, draft, destination and more (the amount of data varies per ship).
They also have a Google Earth file

that lets you view the entire dataset of vessels at once. Google Earth is better able to handle over 10,000 position placemarks at once – so you can actually view the entire data set. Also, with the Google Earth version you will see a link in the placemark that will let you see the recent GPS track of the vessel so you can see part of the route it took to get to its current position. 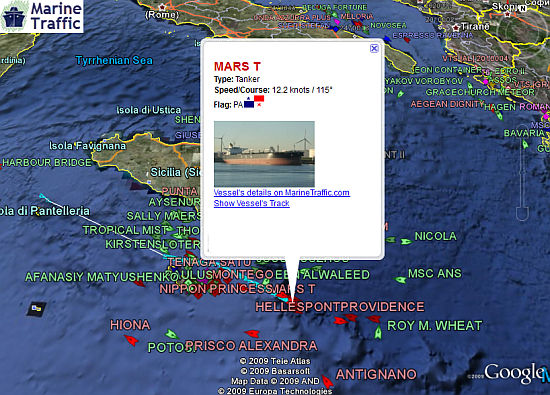 Even Google Earth can get slowed down some by this many placemarks. The developers could use some KML tools to improve its efficiency. For example, by de-cluttering the number placemarks when zoomed higher. Read the MarineTraffic.com FAQ for more information on their data, research, maps, and AIS.