One of my favorite KML collections from the early days of Google Earth (way back in 2005 – which is a long time in Internet time), was the real-time flight tracker by FBOweb that lets you watch incoming aircraft for several major airports in the US. I am a bit disappointed they haven’t enhanced the tracker very much considering all the new features in Google Earth since 2005. But, it still amazes people when I demonstrate live updating positions of planes in 3D approaching a major airport. (See a list of several cities to follow in this post).
Recently I ran across another real-time flight tracker in the Netherlands for Google Earth. The Geluidsnet web site (in Dutch) lets you watch planes arriving and departing from a few airports through this Google Earth network link

(once it loads, click on “Schiphol area” to see the tracks for the last 30 minutes). They display a vertical “fence” below each plane to help visualize the altitude and paths. Orange fences are arriving aircraft, green are departing. The visualization gives a better sense of position and the number of planes when viewed from an angle. If you look closely, you will notice every few seconds the positions (and fences) change. Updating data like this is done using the power of the Google Earth “network link“. 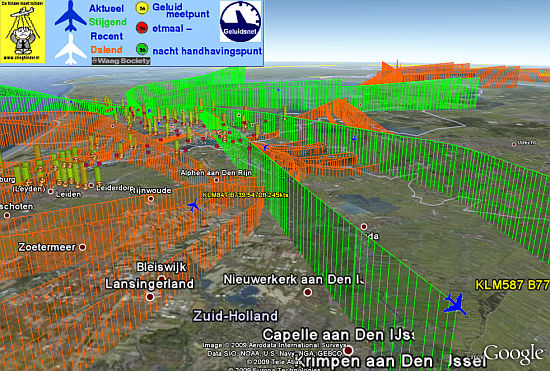 You would think the data is coming from aircraft transponders. [UPDATE 1530 ET: And they are! In doing a translation of a page on the Dutch-speaking site, I read how they were taking sound measurements for noise pollution purposes related to aircraft – and interpreted this to mean that was how they were getting the data. But, locals have explained to me the data is in fact coming from transponders.] But, using Google Translate, I read that they are using sophisticated sound measurements and algorithms to record data on aircraft and can determine position, speed, and even aircraft types.