There were many new features added to Google Earth 5, but the “Tours” functionality is the one getting the most attention. Tours at their most fundamental level enable people to share dynamic Google Earth content, add music and narration, and give control to people viewing the content. Now that the Google Earth plugin supports Tours, you can now wrap up some good KML content with a Tour which shows the content in its best light, add some nice music and narration, and deliver it with a simple URL to a web page. It’s like having an interactive 3D geospatial movie without having to download an entire movie. File sizes are smaller than a movie, yet more rich and interactive. At any time, you can change the view, or stop the Tour and explore Google Earth like normal. And you can have a bunch of Tours and controls added on a web page to provide new types of functionality.
Several Tours have been highlighted here at the GEB during recent weeks, and Keir Clarke at GoogleMapsMania has become quite enamored with Tours as well (even though its not a Google Maps application!). Google has just released a tour gallery

of some of the better Tours all on the same web page interface. 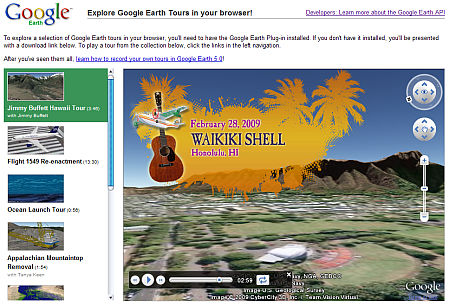 Google Earth 5 and the new GE 5 plugin are still new, and developers are just starting to learn the ropes about how to create tours. The user interface for Tours still needs some tweaking (e.g. a “loading” progress bar while loading narration files, the touring control bar doesn’t disappear when you delete a tour, recording mode isn’t obvious). Also, I’ve had some problems on my machine where the GE plugin hangs up on some tours. But, the plugin and Tours functionality is all new – I’m sure these problems will be addressed. Although anyone can use the “Record Tours” function to create a basic tour, there are even more powerful capabilities possible if you can do a little programming and KML development. I’m really looking forward to seeing some amazing Tours in the coming months! I’ve just added a new Tours category to GEB so you can easily find all the related stories and new Tour content in one place.
Related news: Check out the new GEB Tours category.