Last week I noticed an interesting application of the Google Earth plugin for playing back a GPS track with photos on a travel site called @trip (www.a-trip.com). @trip, like many GPS track travel sites, lets you upload your GPS track and photos. They also have software available for download to geotag your photos and organize your journey log for viewing on the site. I didn’t download the software, but it appears to be free and is made by the same company called Mobile Application Technology based in Taiwan. 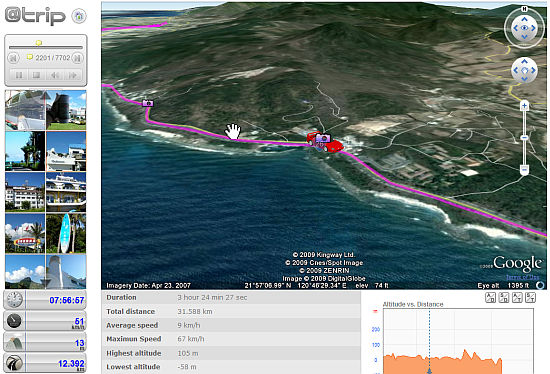 What I found interesting is that @trip actually developed a playback mechanism very similar to the new Tour mode for GE, but by using the GE API. You can see an example by visiting one of the trip pages at @trip, and clicking on the 3D option buttons on the right. This will load the GE Plugin application which uses a 3D car as your point of reference in the 3D scene for playback – which automatically points in the direction of your travels. They have their own set of controls for playback that includes speeding and slowing down the playback. You can adjust your view with the mouse and your camera stays pointed in the new position. It’s well done, and accomplishes the task. I only found myself wondering if you could select different objects (instead of the car) for different modes of transportation (boat, person hiking, plane, etc.).
Shortly after Google released GE 5, popular GPS travel journal site EveryTrail released support for the GE Tour playback by generating a Tour KMZ file you can view in GE (the plugin didn’t support Tours until earlier this month). Maybe EveryTrail will support the plugin now that they can playback these Tours.