Google Earth is probably best known for its huge collection of freely available satellite and aerial photos for places all around the world. Almost everyone who has access to a computer has given it a try – usually to look for their house, or to find out about a place where they want to take a vacation. The imagery database is really huge – millions of square kilometers – the equivalent of millions of 8 megapixel digital camera photos. Google hasn’t released the numbers, but we’re talking hundreds of terabytes of images. 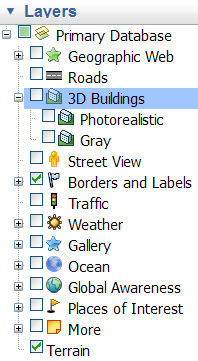 However, an equally important feature in Google Earth are its “Layers“. Layers provide access to all kinds of other data for Google Earth. Seriously, all kinds of information including videos, photos, Wikipedia, real-time weather, real-time traffic, 3D buildings, GPS tracks, and more. The layers are provided through an interface on the lower left of the Google Earth application called, surprisingly, “Layers”. Believe it or not, there may be even more information in the layers than in the imagery!
Google Earth layers provide a wealth of information about our planet on a variety of subjects, and the layers are also a way for Google to share valuable contributions of information from many individuals, and organizations. The layers are organized using a folder-like structure with broad category layer folders at the highest level. You can open each folder with a “+” sign to then selectively view sub-layers. There is so much information here, it takes time to explore and learn what is available. To turn on a layer, simply click the box to the left. A check-box appears when all the layers in a folder are turned on, the box is filled with green when only some of the layers in the folder are turned on.
One thing you probably don’t want to do is turn on too many layers at once. I recommend only turning on a few layers at a time at most, and turn them off when you are done. When you see a placemark icon for some information, make sure you try clicking on some of them. Some of these layers provide a lot of information in the descriptions of the placemarks.
For basic geographic information, I suggest you try the following:

Another selection of the layers serve the purpose of highlighting points of interest if you are traveling. This is the same kind of information you get with a modern car navigation device (or GPS) for finding hotels, restaurants, etc. Examples of these kinds of layers in GE are: Dining, Lodging, Shopping and Services, Transportation, Travel and Tourism, Parks and Recreation, and Community Services. Like with the roads, Google has been steadily deploying this kind of information for more countries. You can find these layers under the Places of Interest layer folder. The layer contains a LOT of information. I recommend turning on the folder whenever you are exploring a broad area for the first time.
All of the layers mentioned above are useful and important, but the really interesting layers are coming from a variety of sources not originally maintained or created by Google. In 2006, Google released the “Geographic Web” layers which consist of a careful selection of useful information inlcuding millions of user-generated photos, and articles from Wikipedia of places all over the planet. And, when that isn’t enough, you can turn to the Gallery -> Google Earth Community layer which show placemarks from posts made by hundreds of thousands of contributors about virtually everywhere on the Earth (read more).
Another important layer folder: the “Gallery” layer folder highlights content from a variety of organizations. Here you will find information from Rumsey Historical Maps, National Geographic Magazine, Discovery Channel, European Space Agency, and even the United Nations. These layers highlight information of human interest, science, history, the environment, and more.
If you haven’t explored the Layers in Google Earth, you are missing out on a world of information. And Google is continually adding and updating the layers. New and updated layer information comes out nearly every month.
Related: