Yesterday Google both announced the winners of one competition, and announced a new competition – both involving Google Earth and SketchUp (the Google 3D modeling program). 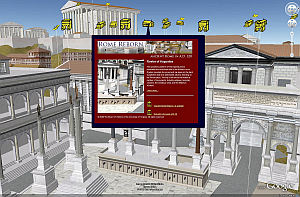 First, when Google announced the release of the Ancient Rome in 3D collection, they also announced a competition for K-12 educators in the US to come up with the best lesson plan involved the Ancient Rome collection. Yesterday, Google announced six winners of this competition. The winners got an Apple Macbook, a digital classroom projector, a digital camera, and more. You can see the winning lessons at the competition web page. I’m happy to note a North Carolina teacher won. 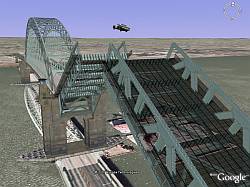 Second, Google has announced a new competition. The new one is the Google 2009 International Student Bridge Modeling Competition. You just need to be a student of a higher education institution almost anywhere in the world. The competition is to build the best 3D bridge and place it in Google Earth, then submit it to the Google 3DWarehouse. And there are cash prizes including a US$5000 first prize! Read more at the competition site including rules and instructions and guidelines on building proper models. I love seeing 3D bridges in Google Earth, so I hope we’ll see lots of students enter this competition. I also hope we get a lot of variety in bridges, not just the famous ones (like the Golden Gate Bridge).
Related: The bridge in the picture shows a creative 3D model you can see in Google Earth which depicts a scene from the Blues Brothers movie where they jump a drawbridge. Read more.