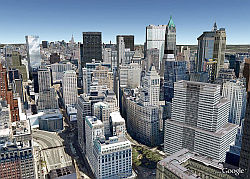 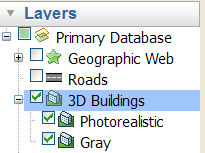 The 3D Buildings layer folder actually has two sub-layers: Photorealistic (models with photos applied to add complex details and colors), and Gray Buildings which are 3D geometric models without photo textures or colors. The latter usually came from GIS databases provided to Google by cities or 3D city database companies. Eventually Google acquires photo data for these gray cities and adds the photorealistic details to the models.
GE has really begun to outgrow the “3D Buildings” label because the layer also includes many other kinds of objects such as: sculptures, bridges, ships, and even whales! Maybe “3D Objects” would be more appropriate?
The 3D models in the layer actually were built by many different people and organizations. Google actually encourages people and organizations to make or upload their favorite 3D buildings and upload them to the Google 3DWarehouse. You will find many 3D buildings all over the world in Google Earth – most of them have been built by people using SketchUp and uploading them to the 3D Warehouse. The ones which get included in the layer are picked by Google and have to adhere to basic guidelines (see some examples of the criteria for selection).
You can also view the many thousands of 3D models people have placed for viewing in Google Earth in the 3D Warehouse by viewing the new 3D Warehouse network link. Some of the models you will find, are already in the 3D Buildings layer, but there are many which either don’t meet the criteria, are duplicates of the same model, are fantasy models, or just not appropriate for Google Earth. But, some of them are entertaining anyway. For fun, just check out the many 3D objects for Google Earth written about in GEB over the years (many of which can still be downloaded and viewed in GE).