Yesterday Google announced some new 3D city content on their LatLong blog. While there are a few nice buildings and other structures in each of these two new cities, they are not complete cities like the ones Google has been doing for some cities in the US. These were actually 3D projects done by representatives of the cities themselves and include just a few notable structures and attractions. What Google is pointing out, is that by contributing 3D content you can help raise the profile of your city from flat aerial/satellite imagery to 3D realism. Google’s post also includes details on how to submit your own 3D content. The two new cities announced are Lucerne, Switzerland and Santa Rosa, California. 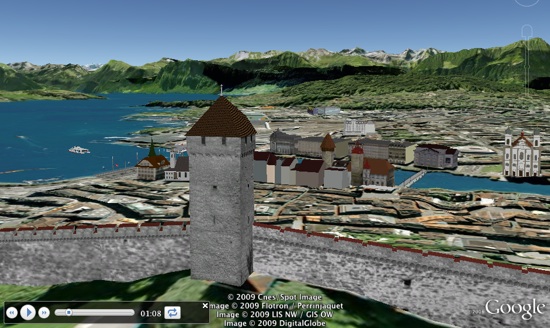 Now that Google Earth 5 has been released, I think announcements like this should also include a fly-by demonstration to show off the new 3D content using the new “Record Tour” feature. Something with music and narration would be really nice, but even just a quick perusal of some of the new content would be helpful.

Here is a short 3D tour

I’ve put together with GE 5 showing some of the 3D content in the two new cities of Lucerne and Santa Rosa. After the file loads, double-click “Play Tour” to start the tour. I used a SpaceNavigator to do the flying – which the Record Tour mode captures very nicely. I’m thinking a lot of people have difficulty flying around to look at the details in 3D buildings. Maybe tours like this will help people see why these 3D cities can be so interesting. Learning to use the 3D navigation in GE can really help as well.