Just noticed a very cool feature for Street View. Last month Google added “User Photos” to Google Maps. These are geotagged photos from Google’s Panoramio free photo upload service for geotagged photos, but presented with a slick Flash-like interface. Well, now Street Views where photos are available will show an icon in the upper right called “User Photos“. If you click on it, it will show the same slick presentation of available photos. A click on a photo and it quickly shows you that photo for the scene you are looking at in Street View. This is very cool! I like how it works a lot (even though its not in Google Earth).
So, here’s the new part: I just noticed something even MORE AMAZING! If you rotate your view around a popular place, the “User Photo” icon shows a photo for the orientation you are looking at. This means Google has figured out the orientation of the photo you are viewing. Not just the location, but WHICH DIRECTION the photo was taken! My guess is they are comparing the Street View photos to the user photos to determine how the shot was taken. Or, they are using the Panoramio Look Around technology. Awesome! For a good example location, try this location in Times Square NYC.
The example I first saw it with was Trafalgar Square in London. You have to visit Google Maps to see the User Photos – they don’t work embedded on a web site. But, here’s a screenshot showing the photos at the top, and viewing a user photo on the main page: 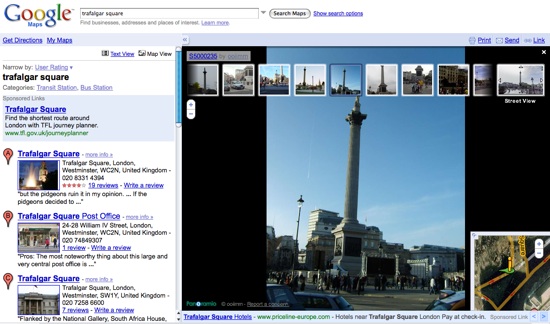