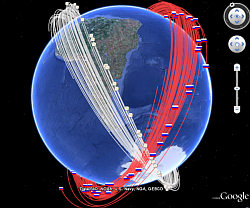 Two satellites, Iridium 33 and Cosmos 2251, made the news a couple of weeks ago when they accidentally collided 400 miles above the Earth. This was a rare occurrence, but the possibility of further collisions has now increased. The resulting orbital debris from the collisions is being tracked by Norad and other services. Celestrak is providing data on the debris from the collision. Rob Simpson of Orbiting Frog has released a Google Earth network link

that lets you see the current orbital positions of some of the debris from the February collision. The file automatically updates with the current orbital positions. As you can see from the screenshot, much of the debris from the two satellites remain on a rough approximation of the same path as the two satellites (compare them to the 3D animation of the collision by James Stafford).
[UPDATE 1110 ET: A short while after I posted this, I discovered James Stafford posted another debris tracker based on similar data. In his case, he used the GE plugin to dynamically track a few instances of the debris. Check it out here

. What’s cool about this is that by using the plugin he can update the positions several times a second for a very smooth animation of the real-time positions! Zoom in close to one of the debris markers to see it in action. Google Earth (the full application) can only update with network links one time per second, so this technique offers a way to show visualizations more smoothly by using the GE Plugin.]
Related: See the orbital positions of all satellites in Google Earth from your browser.