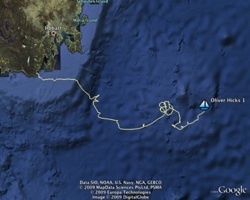 Google posted yesterday about a guy who is attempting to be the first to row around the world. Oliver Hicks has left his home country of Australia and will be headed down toward Antarctica and attempt his circumnavigation the short, but very hostile, route. His attempt is sponsored prominently by Virgin, and Google is involved because Olly will be using Google products. He is connected to the Internet and able to share his experiences along the way. You can follow his track in Google Earth

(a GPS track shows his route, you’ll notice he doesn’t always go forwards since he can’t always overcome currents and winds). It’s certainly an admirable goal, and I hope he succeeds.
I am especially interested in Olly’s adventure since later this year, my wife and I are also embarking on a circumnavigation. Our attempt will be in a much more comfortable mode of transportation – by sailboat. We plan to make heavy use of Google products as well, and, not surprisingly, in particular Google Earth. We plan to show how to leverage Google Earth to plan our trip, and document our adventures in a unique fashion. And we hope to help raise awareness of some of the issues facing our oceans and sea life. We will not only have GPS tracks, but also a wide range of photography and placemarks documenting our planned five year journey. Google will also be involved in our trip by making use of the Google Earth content we will create. It’s cool to see Google is such a big supporter of ocean-going adventures, especially after announcing Google Earth 5’s new ocean-oriented content. 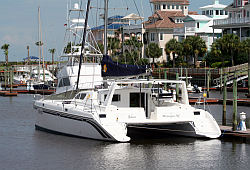