[UPDATED] One of my favorite new major features of Google Earth 5 is the new Mars mode. This feature isn’t obvious when you first load up Google Earth 5, but it is fantastic! After loading Google Earth you look for the little planet icon at the top center of the view. Click on it and you will see a menu. You now can switch between Earth, Sky, AND Mars.

Once you select this, Google Earth transforms itself in a view of Mars instead of Earth. This is NOT just an image overlay on top of Earth! Its a complete simulation of the planet Mars just like Google Earth. You use the same controls, and there is even a set of very useful layers just like in Google Earth. Here’s a screenshot: 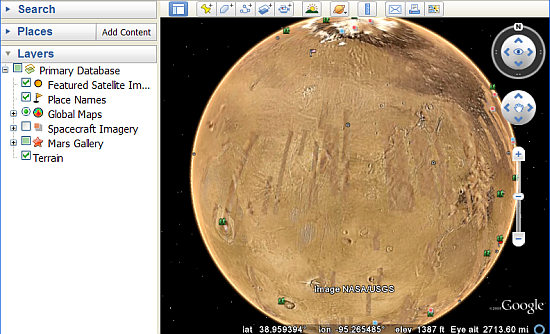 Zooming in is where the real excitement begins. Google shows satellite imagery just like with Google Earth of the martian surface. Not only that, but they have 3D terrain as well! Look at this shot of Valleris Maneris (the huge grand canyon of Mars): 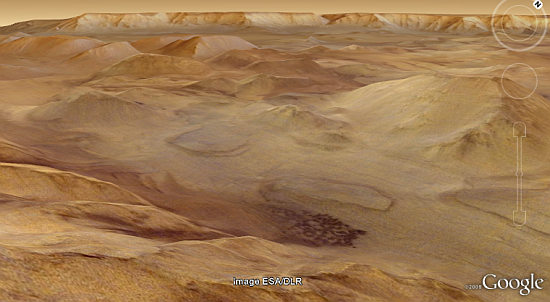 And, that’s just the beginning. There are very high resolution satellite images from the HiRISE imaging system on the Mars Reconnaissance Observatory satellite. You’ll see strips of HiRISE imagery overlayed in Google Mars. These images are just as high resolution as those you often find in Google Earth. You can see things down to the size of cars or even smaller in these images!
See this shot of a crater with the HiRISE imagery: 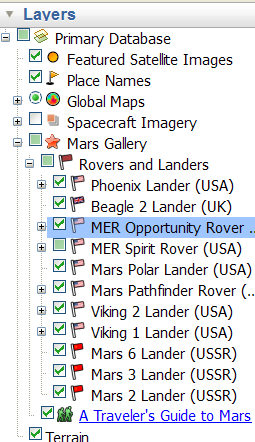 OMG…this is really cool! Check out the layer folders on the left. Open up the Mars Gallery->Rovers and Landers. Then double-click on MER Opportunity Rover layer folder.
This will fly you to the place where the robotic explorer known as “Opportunity” moved across Mars. You can see its track, and as you zoom in you can see where it went. Like when it went into Victoria Crater in September of 2006. Check out this screenshot which also shows that you can see panoramic photooverlays of color photos by Opportunity: 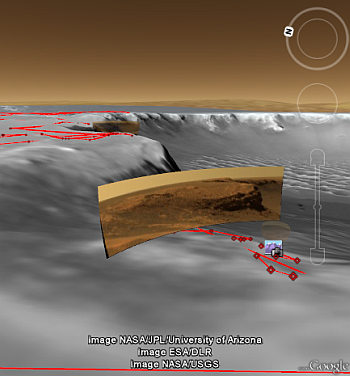 [UPDATE: Here’s a video I’ve created illustrating all of this in more detail:

Download the new Google Earth 5 now and you can launch yourself to Mars right now! It’s free!