[UPDATE 19-JAN: Thanks to a tip by ‘Hill’ at the GEC, it appears Google might be posting a satellite image of Tuesday’s inauguration shortly after the event thanks to the new GeoEye satellite. See this story by VentureBeat. The only problem is that there’s a “mostly cloudy” forecast.]
Google has just updated imagery for the Washington DC National Mall area of Google Earth. This special update was probably due to the upcoming Presidential Inauguration on Tuesday of President-elect Barack Obama. The new imagery is dated 2008 and there also appears to be new imagery in surrounding areas. The White House and Capitol building appear to still have the same older imagery dated 2002. Turn on the 3D Buildings layer for added realism. 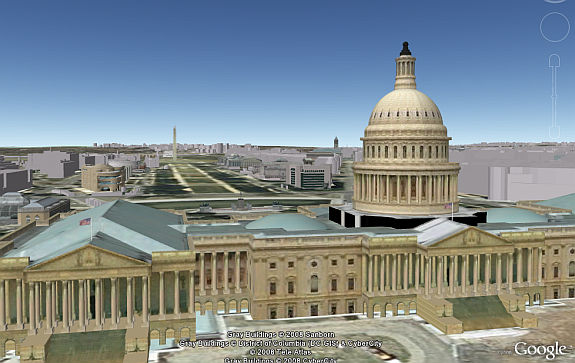 The inauguration ceremony takes place to the west of the Capitol Building (see a good description of the Inauguration from About.com). Then a parade is held from the Capitol Building to the White House. Google Maps Mania has a summary of several useful maps for viewing the inauguration details. You can view a map of road closures which shows the location of Jumbotron monitors near the Lincoln Memorial, and here is a video (with very annoying music) showing the progression of the parade in 3D using Google Earth.
Censorship Note
Censorship aficionados will be noticing that the US Naval Observatory (where the home of the Vice-President is located), now has a new image dated Feb 6, 2007. This image is a bit blurry, but is not heavily pixelated/censored like the old imagery. See a comparison of the before and after views: 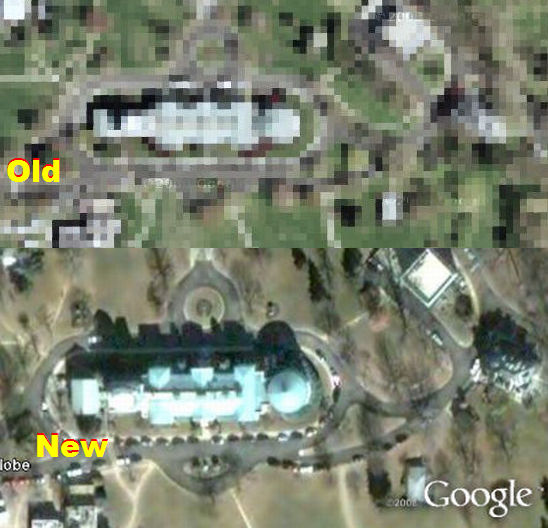