Google has released a new rendering of the ocean floors around the world. The ocean floor is colored to reflect the terrain features of the sub-sea surface. The new rendering is a bit higher resolution (much higher in places) and is presumably more accurate than the previous version. According to the copyright messages the new ocean floor is coming from “SIO, NOAA, US Navy, NGA, GEBCO“. These entities are dedicated to getting the best ocean floor surface data they can. You don’t have to do anything special to see the new ocean floor, just open up Google Earth (it’s not visible in Google Maps yet). Unfortunately, the new ocean floor in Google Earth is NOT 3D – yet. This could be the first part of the release of new data for the rumored “Google Ocean“. Hopefully, we’ll see a 3D version someday.

[UPDATE: As someone pointed out in the comments, some island atolls which had low resolution data look less “visible” in the new imagery. Particularly noticeable are the Maldives, also St. Helens, Montagu Island, and many other islands now show “floor” instead of the islands. I have to agree with the sentiment of the commenter. Although Google has tried to at least show those portions of the atolls which have above water presence. In my opinion it is very important to show satellite/aerial imagery any time you can see the undersea surface in addition to the land. If the bathymetry is visible through imagery, then show real photos! It will be helpful to mariners/boaters who use those waters who will then be able to see both undersea structure, and locations of anchorages (presence of other boats).]

Here is a comparison of the old ocean floor (as currently seen with Google Maps) verses the new look in Google Earth (click on the image for a larger view comparison): 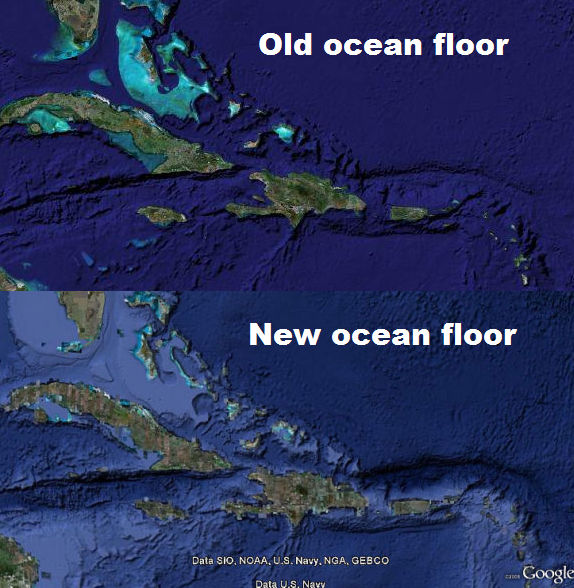 In some areas – like near the shore of Puerto Rico – the ocean floor imagery shows higher resolution terrain data than in other areas. But, what many of us would like to see is 3D bathymetry (terrain) data as well! It’s all just a matter of time.