The tech world was abuzz this weekend with rumors about a big upcoming event concerning Google Earth. WebProNews and AppScout were the first to report on Friday. Google has sent out an invitation to the press, including Google Earth Blog, for a “Special announcement about Google Earth” on February 2nd in San Francisco. And this event looks like it could be the biggest announcement since Google Earth was released! Speakers include: former Vice President Al Gore, CEO of Google Eric Schmidt, VP of Google Marissa Mayer, and Director of Google Geo John Hanke. Wow!
There are no specifics on the announcement mentioned in the invitation. Just some comments about how Google Earth has reached hundreds of millions of people around the world. The last time Google had this many dignitaries to make an announcement for Google Earth was in June of 2006 when they announced the upcoming release of Google Earth 4. Eric Schmidt and the two co-founders of Google (Larry Page and Sergey Brin) were there for the announcement made by John Hanke at that event. Google Earth 4 introduced photorealistic textures to 3D models, GE for the Mac and Linux, multi-lingual support, and a huge global imagery update covering many countries for the first time.
Another clue for this announcement was some other speakers for the announcement: Sylvia Earle – Explorer-in-Residence for National Geographic Society; Terry Garcia – EVP for National Geographic Society, and Greg Farrington, Executive Director for California Academy of Sciences. The last one isn’t surprising because the invitation says the announcement will be held at the California Academy of Sciences.
The big clue is Sylvia Earle. As pointed out by everyone, Sylvia Earle is a world renowned oceanographer. So, of course, the immediate conclusion is that Google Ocean is finally about to be introduced. Rumors have been flying about Google Ocean for quite a while.
So, clearly Google Earth is going to get some new Ocean-related data. Google just added new detailed ocean floor imagery last week. And, it’s a known fact that several of the parties involved with that also have worked on 3D bathymetry. Google Earth to date has not had many layers which provide data about the ocean. And the ocean terrain has always been flat (2D) in Google Earth. More ocean data is an area I’ve been looking forward to with great anticipation. Especially since this year my wife and I are departing to spend the next five years circumnavigating the oceans by sailboat. Having Google Earth help us explore the oceans will be handy! Google Earth has needed more information about the 75% of the Earth most of us ignore. 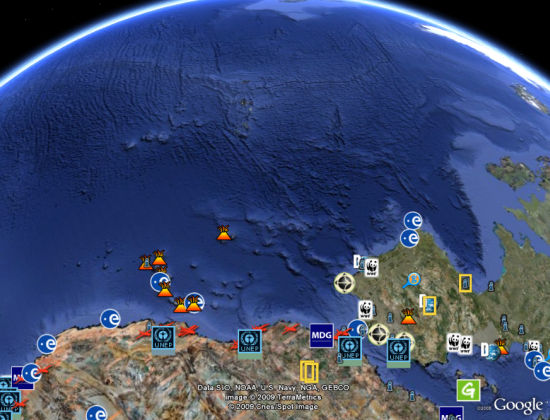 I don’t think this announcement will be confined to just Google Ocean though. When Google makes an announcement like this, they always try to push the envelope on multiple fronts. And, with Al Gore headlining the event, I’m sure we’re going to get some data about the environment. I’m expecting lots of new features and data to write about in February. It’s going to be exciting! I just wish I could attend the event myself – but, unfortunately we’ve got plans for next week which keep me from going. But, have no fear, I’ll still be reporting on this major event!