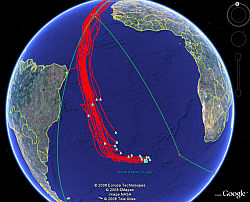 It used to be very difficult to follow the drama of an around-the-world-sailing race. But, the Internet changed all that. One of my all time favorite Internet experiences was following the 2000-2001 Vendee Globe solo non-stop round-the-world race. The shining star of that race was a young 20-something Ellen MacArthur from the UK who managed to take second place in a very dramatic race. Ellen was later awarded an MBE for services to sport – so she’s now Dame Ellen MacArthur. Being able to follow the racers’ positions on a map and read daily updates and even see pictures and video from solo competitors at sea was a revolution in the sport of round-the-world sailing races. But, the story of Ellen’s race was especially captivating.
The Vendee Globe is only held every four years. On November 9th, 2008 the current race began from Les Sables d’Olonne, France. The competitors are currently in the southern Atlantic Ocean and is a very close race so far. Since the last race was held in 2004-2005, this is the first time the Vendee Globe has been held since Google Earth was released. When the race started I was disappointed to find there was no published KML file for viewing the race in Google Earth. They do have a web based map and race tracker.
Fortunately, some enterprising French programmer has created some KML for following the race in Google Earth. You can visit his web site here (french). Here is a link to download the current positions of the racers

which will automatically load his file and refresh every 6 hours so you can keep the file handy for putting in your My Places in Google Earth.
The data for the Vendee Globe racer positions is available in spreadsheet files at the Vendee Globe rankings page.