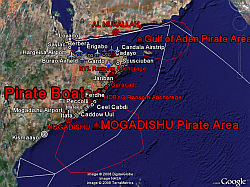 The reports of escalating incidents of piracy off the coasts of Somalia have been getting a lot of attention in recent months. The piracy has been in all the news with the recent capture of a supertanker called “Sirius Star” and hostages of its 25 crew along with a full load of oil (worth over $150 million), and the capture of a cargo vessel and hostages carrying tanks a few weeks ago. Last month, Google Earth Community (GEC) member ‘expedition’ created a very interesting map for Google Earth showing the region of piracy and detailed placemarks showing the locations of the pirate strongholds all along the coast of Somalia. The file is the product of extensive independent research using maps, charts, and reports beginning in year 1860 through late 2008. Where possible he used the high resolution satellite imagery of the coast to identify actual buildings where pirates are based. Download the piracy map here

.
From his post:
“See the building compounds where pirates and warlords cache arms, plan their attacks, obtain ransom, and communicate with the ships they seize offshore. View the actual pirate bases, vehicles, checkpoints, and pirate boats. Locate the precise areas of the sea where vessels are hijacked, and where the pirates drop anchor to hold their crews for ransom. Find secret airstrips where pirate crews get their daily fix of addictive khat leaf stimulant flown in. View the places where commandos have captured pirates fleeing or targeted their land-based resources…. Over 120 updated placemarks. Information and coordinates have been gathered from many news sources, maritime organisations, governments, insurance companies, and mariner reports.”
An official international piracy map is available from the International Maritime Bureau which shows the locations of piracy reports in Google Maps for the year 2008 – so far. via GoogleMapsMania.