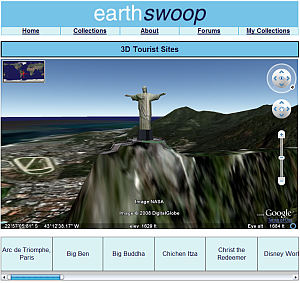 Google Earth’s 3D dataset continues to grow and improve in quality over time. Many of the most famous tourist sites around the world are viewable in 3D. And, if you haven’t visited these sites recently, it’s worth checking back. Google has been gradually improving the resolution of the 3D terrain around the world. Places like the Grand Canyon, Mount St. Helens, and the Matterhorn are much better than they were when Google Earth was first released. Famous sites like Stonehenge, Christ the Redeemer, Pyramids of Giza, and many others have recently had improved 3D models added. Many of these models are coming from modelers who submit them to the 3D Warehouse and were selected to be included in the Google Earth 3D Buildings layer.
To give you a taste of many of the best tourist sites visible in 3D in Google Earth, I’ve put together a tour in Earthswoop of some of my favorites. You can view the collection of 3D Tourist Sites at Earthswoop

. You will see about 25 locations around the world including: the Sphynx, Big Ben, Big Buddha, Disney World, Taj Mahal, and many others. Have fun on your free world tour!
NOTE: Earthswoop uses the Google Earth plugin. You can search inside Google Earth for almost any of these locations (e.g. “Christ the Redeemer”). You might also get better quality viewing these locations inside the real Google Earth (depending on your graphics card), and especially the terrain if you increase your terrain quality settings inside Google Earth’s Options. However, keep your terrain quality lower for normal viewing to keep your graphics speed up.
Related: