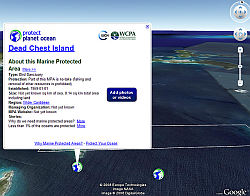 Today, at the 4th World Conservation Congress, IUCN’s World Commission on Protected Areas launched a plan to help protect planet ocean using Marine Protected Areas (MPAs). Over the past year several groups have been working with the teams at Google Earth and Google Earth Outreach to devise a way to change a major gap in knowledge and bring marine protection, and the wonders that our nature reserves in the sea can offer, to internet users worldwide. As part of the celebrations at the 4th World Conservation Congress in Barcelona they have launched a special IUCN WCPA – Marine layer through Google Earth Outreach that not only shows you where we have protected the sea, but which also allows you to get involved by sharing pictures, videos and stories about your local sites in a way not previously possible.
This Google Earth content will presumably be a layer in the Global Awareness folder, but you can see it now as a KML file

from the Google Earth Outreach site. You have to zoom in a bit to see the placemarks appear. Included are placemarks marking marine protected areas, and also outlines in many places of sanctuaries, protected areas, fish nurseries, etc. There are detailed outlines of existing areas in the US especially. The placemarks show more information on each location. More importantly, you will see a button allowing you to “Add Photos or Videos” of each location. I think they should also encourage people to turn on the Panoramio layer to show the many photos already available in Google Earth for many of the sites. You can also view the protected areas right on the home page of their new web site Protected Planet Ocean which uses the Earth API plugin. Personally, as someone who is a sailor and very concerned about our world’s oceans and marine life, I think this concept and use of Google Earth is really great.
The organizations are working together to provide the first illustrated picture of global ocean protection of wildlife and habitats using Marine Protected Areas (MPAs). The MPA layer is an outreach initiative between Google, the International Union for the Conservation of Nature and its global commission of scientific experts – the World Commission on Protected Areas. via the Official MPA blog.