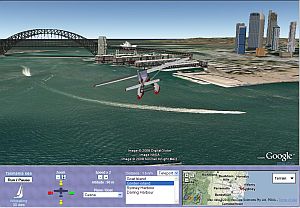 Google Maps Mania pointed me to WikiSailing – the english/french wiki has lots of interesting sailing information. They have information about anchorages, dive sites, windsurfing locations, parks, and more. They also have a section to be devoted to showing sailing trips. But, what is really interesting is that they have started developing a Google Earth Plugin application to give tours of sailing destinations. These tours simulate an airplane or sailboat moving along a track around the destination you select. There are a few sightseeing examples with the simulated tours on their main page. Check out the Sydney Tour

for example. You start out with an airplane, select the “Run/Pause” button in the lower left and you will immediately start flying around Sydney (assuming you have the GE plugin installed). You can adjust the speed, zoom level (how close to the plane your view is), and which direction relative to the plane you view.
The application still has some rough edges. The sailboat mode is a little jerky even if you speed up the simulation speed. And, the sailboat follows the same path as the plane – including going over the ground – oops. Also, you can view from behind, left, or right. But, the view from the front doesn’t seem to work. But, I think this is an excellent idea which makes viewing locations more dynamic without requiring someone to take control of the flight/tour themselves. Although, it would be nice if you could also fly yourself! A GEB reader pointed out to me you can select “Manual” instead of “Teleport” and then you can fly it yourself using the cursor keys!