Even after three years of frequent use, you would think I would get bored looking at just plain Google Earth imagery and terrain. But, our planet is a really beautiful place. And I’m still amazed at the ability of Google Earth to depict the wonder of some sights around the world. In particular, the 3D terrain and imagery can really capture amazing sights around our beautiful rugged planet. And, Google is constantly improving upon both the 3D resolution of terrain and the imagery. So, it just keeps getting better. Someone called ‘pietro30’ at EarthSwoop created an excellent tour of Earth terrain features. You can view the tour at EarthSwoop

using the GE Plugin. Click on the various locations below the window that pietro30 picked for you to view. While this collection is by no means a complete collection of terrain wonders (it’s missing the Grand Canyon, Mount Everest, the Matterhorn, and many other notables), it does show some amazing places. If you turn on the Panoramio layer next to the viewing window, you can also view photos of the various sights. People are always amazed when I show locations like this in Google Earth. Most people still confine themselves to the straight-down views of the Google Earth imagery. 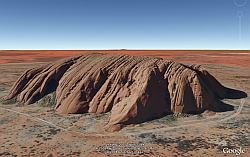 One of the sights, “Ayer’s Rock” (now called again by its native name of “Uluru“) down under in Australia is particularly interesting. Since Google Earth first came out, Google has updated Uluru several times. First they updated the imagery of Uluru back in 2006 to higher resolution. Google later added higher resolution 3D terrain, and recently even higher resolution imagery for Uluru. In fact, if you look closely at Uluru, you can see people climbing the rock along the white-spotted marked trail. And the terrain much more accurately matches the shape of the real scene. Turn on the Panoramio layer to see photos people have taken of the location, and you can clearly see how accurately Google Earth renders the scene.
When GE version 4 came out, Google added a setting to increase the level of detail in terrain quality. So, if you are using the full application of Google Earth (not the plugin) you can see the terrain even more accurately by adjusting the setting. Google’s base layer of 3D terrain comes from Space Shuttle 3D data at 90 meter resolution. But, Google has been updating the terrain in many places in Google Earth to much higher (typically 10 meter resolution). For example, most of the US is at 10 meter resolution (it started with the Western US). And many places such as Uluru, New Zealand, and the Swiss Alps, have much better as well. Two places I know of in the US have 3 meter resolution: Mount St. Helens, and the entire state of West Virginia.
One thing I need to do is write a new “Important Basics” post tied to Google Earth 4.3. The interface for tilting your view has changed substantially from previous versions of Google Earth. Here is the section on navigating from the Google Earth V4.3 User Guide.