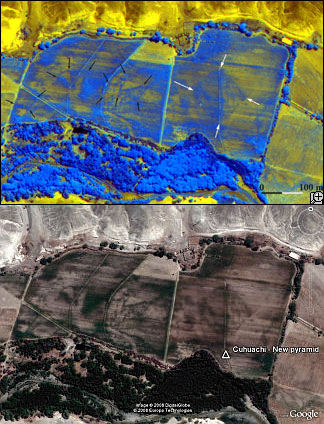 Researchers recently discovered a buried pyramid in the Peruvian desert using satellite imagery and “special algorithms”. The buried pyramid is about a mile from the Cahuachi’s archeological site. But, if you use the satellite photo released by the researchers you can find the location in Google Earth. You can easily see evidence of the site yourself in GE’s imagery. It turns out the structure is underneath a crop field – and the underlying structure has changed the color of the soil such that shapes are visible in the DigitalGlobe satellite photo. GEB reader Markus Mehring told me about this discovery and after seeing the satellite image shown in news reports, he matched the location in Google Earth. See it yourself here

. Markus thinks the data the researchers used was possibly the same DigitalGlobe image used in Google Earth (he says it matches very closely). According to the researchers, this is a large pyramid with a base of 300 feet on each side and with seven levels similar to another pyramid they are already excavating.
By the way, the Cahuachi site is just south of the famous Nazca Lines. And, here is a good Google Earth Community post showing a tour of the Nazca lines in Google Earth (with image overlays).
Google Earth imagery is definitely good enough to discover archeological sites – if you have a eye trained to look at the imagery properly. In fact, there have been a number of discoveries made with Google Earth. A long-time friend of mine, by the name of Scott Madry is a professor at the University of North Carolina, and has used Google Earth to discover dozens of sites in France thanks to Google Earth. But, Scott has been using aerial imagery for archeology for decades. Read a National Geographic story about Scott’s Google Earth work. About.com has written a nice article about using Google Earth for archeology as well. And, if you’re really fascinated about seeing archeological sites in Google Earth, make sure to check out JQ Jacobs ancient monuments site which shows all kinds of locations in Google Earth.