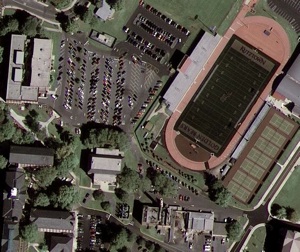 Those of you regularly reading this blog, already know there is a wave of new satellite imagery coming to Google Earth (and other mapping tools) in the coming months. Both DigitalGlobe and GeoEye have launched new satellites in the last year, and more satellites are going up soon. Google has an exclusive contract for online use from the new GeoEye satellite. And, the first image from the GeoEye satellite has just been released, of Kutztown University in Pennsylvania. This image probably won’t find its way into Google Earth for several weeks, but they wanted to show off the new image capability. Click on the thumbnail to the right to see a larger version. The new GeoEye satellite can capture up to 0.41 meters per pixel resolution, but because of US laws can only release up to 0.5 m/pixel imagery to Google (the best stuff is for the intelligence agencies and military). The imagery is essentially black and white, but they process the photos with color from other imagery to add color. You can see this imagery is very nice. Story on new GeoEye imagery via CNET.
Google for the past three years had a similar exclusive contract with DigitalGlobe – where only Google could use DigitalGlobe imagery online. However, their renewed contract was no longer exclusive, and Microsoft has announced they will now be using DigitalGlobe imagery on Virtual Earth. This makes it possible for Microsoft to have much more global imagery than they currently have in Virtual Earth (although, nothing Google doesn’t already have). While we’re talking about Microsoft, I just found out they also added stars in the background of Virtual Earth 3D. Google Earth has had real stars from the beginning, but the new Virtual Earth ones have color and size (based on brightness) – which I think is better looking than Google Earth’s stars (and something I’ve suggested to Google for years).