[UPDATE 1250: The list is growing quickly. Found four new cities in the last few minutes with help from readers.]
When Google Earth 4.3 first came out, Google released a few cities with more complete 3D textured buildings. Just turn on the 3D Buildings layer – or more specifically the Photorealistic sub-layer of the 3D Buildings layer folder. Google wasn’t saying how they generated them, but the new cities were more complete and had a consistent color and high quality 3D textures. (Read the GEB review of 4.3).
My guess is that the textures are coming from aerial photography (based on the angles of reflections in the textures). In some cases, I’m guessing the 3D models are coming from 3rd party sources. Google is leaving any 3D buildings already modeled by others and selected from the 3D Warehouse. But, they are adding hundreds of buildings for these new cities with textures. In June they added a few more cities. You can tell when they have the auto-generated 3D buildings, because with GE 4.3 they won’t highlight in “blue” when you put your mouse over the new buildings.
I was checking out Chicago and by accident noticed there were many of the new buildings. So far, I’ve discovered the following new cities have the new 3D buildings: Chicago, Nashville, Philadelphia, San Diego, Minneapolis, Kansas City, St. Petersburg, Jacksonville, Clearwater, and Miami Beach (the last four all in Florida). Other cities already known to have the new buildings: US: San Francisco, Baltimore, Raleigh, Atlanta, Charlotte, Boston, Orlando, Austin, St. Louis, Oakland, Dallas, Tampa, Memphis, and Phoenix. Also, Zurich, Munich and Hamburg in Europe; and Tokyo in Japan has a smattering of 3D textured buildings. And, don’t forget Disney World in 3D. I’ve just noticed that Berlin has mostly complete coverage in non-textured buildings. I can’t remember if that is new. Here is a screenshot of Miami Beach: 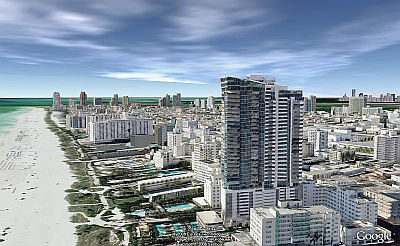 I’m guessing there are other new 3D cities out there. If you find some, let me know with a comment here, and I’ll add them to the list. Just remember to check the list above, and if the 3D textured buildings don’t highlight when you put your mouse on them – then they are probably new.
I should mention that Google is in competition with Microsoft on 3D cities. Microsoft’s approach for Virtual Earth 3D from the beginning has been to auto-generate 3D buildings and textures from aerial photography and photogrammetry. Microsoft now has hundreds of cities (I last heard 300) with 3D buildings and low-resolution textures. They also have a few cities with higher resolution textures AND auto-generated trees. Read the GEB review of the first set of version 2 cities in VE. It would be cool if Google added trees for realism as well, and I wouldn’t be surprised if they did (oh yeah, I forgot they did include them in the Disney World models!). Meanwhile, Google is obviously adding additional cities with high resolution textures. In fact, I think Google’s textures in these new cities are even higher quality than Microsoft’s version 2 cities. Also, I think Google’s approach with user-generated 3D buildings does have one quite positive result: there are certainly many more cities and locations around the world in Google Earth with 3D models than are in VE. Even if the coverage is not as complete for cities with only 3D Warehouse models.