[UPDATE October 31: See the new post today which includes the location of all items found including the crash site, and today’s location where they believe they found Fossett’s remains.]

[UPDATE 2-Oct 2010 ET: According to AP, some human remains were found at the crash site today by the NTSB. It’s a sad day in the story of a great adventurer. But, its good to know that evidence points to a quick end with little chance of suffering.] 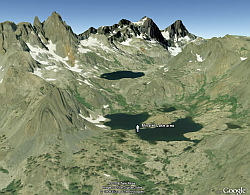 I’ve been tracking the developing story of the discovery of Steve Fossett’s plane wreck, and personal items belonging to him. See earlier GEB story with notations. Now, one GEB reader pointed out the FAA has posted coordinates for a no-fly zone to keep planes from flying over the wreckage area. The coordinates of the no-fly zone are most likely the coordinates of the wreck – they match other details released in previous news reports. See this KML file

I will update the KML file when even more official coordinates of the wreck site are released.

[UPDATE 1426: A photo from the LA Times of a rescuer near the crash site confirms the “no-fly zone” coordinates I included above is the approximate crash site location. The terrain in that area is close to matching the photo. Based on the photo, I estimate the site where the photo was taken as .85 miles NW of the no-fly zone coordinates. I’ve added this to the KML file above. I used the terrain in Google Earth to match the position where the photo was taken.]

[UPDATE 1750 ET: I’ve now added an image overlay of the topographical map provided by the Sheriff at the briefing today showing the location of the items found and the plane wreck. They compare well with the placemarks I located earlier. Apparently the FAA No-Fly zone coordinates are closer to where the IDs were found.]

[UPDATE 5-Oct 2100 ET: I’ve added a blow-up topo map overlay from the SAR team that went to the site. This shows an even more accurate map of the location of the crash site, and demonstrates that the placemark of the wreck site I put in based on the first photo released is quite accurate. I would guess my placemark was within a few yards of the actual place the photo was taken, and is near the middle of the crash debris path.]