Many people have found ways to tie their GPS with Google Earth to show their position in real-time. In fact, Google released built-in features for real-time GPS to the premium Plus/Pro/Enterprise versions of Google Earth starting with a beta version of GE 4 in December 2006. However, Google’s real-time GPS support has never been particularly fancy. The best real-time interface I’ve seen so far has been from Goops Technologies. I really like Goops because they support features supporting all types of travel including planes and boats. However, I wish they had a Mac version too. Thanks to Google Earth working even without an Internet connection, you can have a powerful 3D mapping applications wherever you go. 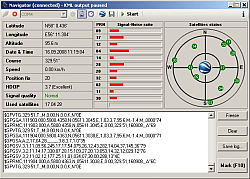 Recently, Valery Hronusov (who has built many useful Google Earth files and applications) has released a new free real-time GPS tracking application he is calling Navigator. It also only works on Windows, but it has some nice looking features. I tried it with my Garmin 60Cx and it works quite well. It automatically logs your track to a KML file and you can control your zoom level while it tracks. His support for USB interface works very nicely, and they claim it will work with multiple GPSes. He is just getting started, so it doesn’t have the polish of Goops. But, Valery has a reputation of implementing lots of innovative features, so maybe Navigator will add some new stuff in the coming weeks or months.
So, if you want real-time GPS tracking with Google Earth. You have yet another method – without resorting to buying the premium versions of Google Earth. At least for personal use. If you need to use Google Earth for commercial applications, you should still buy a Google Earth Pro license.