The Large Hadron Collider is in the news today after its first successful test. Below is a Google Earth file which lets you view the LHC in Google Earth with a 3D model suspended above ground so you can see the layout. There is also a diagram of the entire underground ring and even an animation showing two particles colliding. 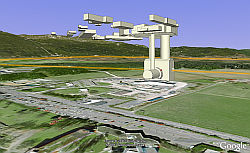 The Large Hadron Collider (LHC) is a particle accelerator and collider located at CERN, near Geneva, Switzerland. Large particle accelerators are built in circles to get particles up to very high speeds (near the speed of light). The LHC is nearly 27 km in circumference and is located 50 to 175 meters underground on the border between France and Switzerland. CERN is the European Organization for Nuclear Research. This massive underground structure is difficult to visualize since it is all underground.
Google Earth 3D modeling guru Joey Wade has posted a 3D diagram and models showing the LHC and floated it directly above its actual location so you can see how it looks in Google Earth. Download the LHC model

. He has roughly modeled the 3D buildings on the surface so you can get a feel for the underlying structures and how deep they are underground. Zoom in to see the buildings and tilt your view. Joey has included a folder with YouTube videos in placemarks which provide some excellent information about the project. The large deep structure is the new ATLAS particle detector system. Nice work!
Just for fun, Joey also included a little animation showing two particles in opposite directions going around the collider. After loading the file above, just click on the play button to the right of the time slider to see it in action!