Ok, I’ve been hinting on this blog in various posts I’ve been up to something. And, things have not been slowing down enough for me to write. So, let me at least explain in general terms what I’ve been up to and how Google Earth will be involved. 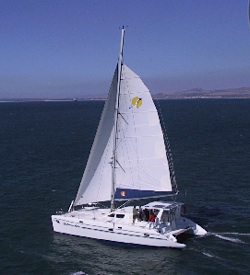 A few years ago, my wife Karen and I bought a sailboat and took our kids sailing around the Caribbean (see Google Earth visualization of that trip). My wife and I thought cruising and exploring by sailboat was such a great idea, we planned to do it again when our kids moved out for college. In fact, we decided we would sell our house, buy a new boat, and live and sail around the world for five years. Guess what? Our kids (who are twins) are starting college right now. And we just bought a new sailboat! I had to sail it from the Bahamas last week, that’s why I had Mickey writing blog posts, the boat doesn’t have satellite communications – yet.
Using Google Earth these past three years has only intensified our plans for the trip. First, to help us explore places we want to go. Of course, we want people to be able to see the places we go and will post Google Earth maps of our route and destinations. Since for three years I’ve been writing about the multitudes of different ways Google Earth can be used, plans have been made for some really cool Google Earth content coming from our circumnavigation. Real-time tracking, using Google Earth for nautical charts, geotagging photos, GPS tracks when we go ashore, aerial photography, and more (see a test run here). In the coming weeks, I will be sharing more about what is planned in those areas.
For five years, we will be geo-blogging our trip and leveraging Google Earth and many other tools to share our experiences. In addition to Google Earth Blog, there will be a new blog dedicated to the trip. The plan is to continue Google Earth Blog – although, I will get some help to keep the daily flow going. We won’t be departing until sometime next year (originally it was going to be November 2009, but we may move that up a bit). We’re very excited about this trip, and I’m also excited to share with you the plans I’ve been cooking up to leverage Google Earth to make following our trip an experience in itself!