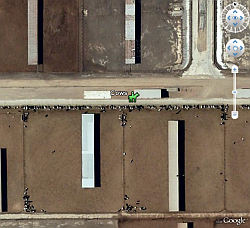 For the past couple of days I’ve been seeing the reports of a scientific study about cows conducted using Google Earth. The results from this study sound like a hoax. German scientists studied hundreds of herds from around the Earth found in Google Earth, they say that cows seem to align themselves with the magnetic north when lying or grazing. See Los Angeles Times story. This study was actually published in the proceedings for the National Academy of Science. It’s been a scientific fact that birds and bees seem to navigate via magnetic fields. But, this is the first I’ve herd that cows can do it!
Naturally, I wanted to see if I could duplicate the scientists’ results. So, I started looking for herds of cows in Google Earth and placemarked their locations. Here is a collection of cow herds

for Google Earth (see post), so you can see the difference between true north and magnetic north in the GE compass.
Check out the placemarks and see what you think. Personally, I don’t see any evidence that cows are aligning themselves more towards the north than any other direction. Is this study for real? In the attached screenshot, these cows are pointing north – but, they might have a reason for that – feed bins. There are a lot of cows in similar pens nearby aligned north/south or east/west – all due to feeding. If the scientists used those types of groupings for their statistics, I think they are pretty bogus.
The other possible explanation that occurs to me is that the scientists were looking at the shadows. The shadows of cows (and other objects) in Google Earth will generally point to the north/south because most of the photos will be taken as close to noon as possible to get maximum brightness.