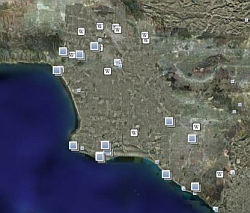 I’m back from a four day trip with practically no Internet access (more details about the trip coming). I have some catching up to do.
On August 7, I mentioned the discovery of the new Geographic Web layer updates for Google Earth. I think the Geographic Web layer has some fantastic data (millions of geotagged photos, Wikipedia articles all over the planet, and more), and the new update enhances that data in quality and quantity in many ways. However, I made some comments on the change in design involving redundancy, and the new colors, shapes, and sizes. Rich Treves also comments on his Google Earth Design blog about the new changes. And he largely agrees with my thoughts, and even suggests some other design alternatives that would have kept the look more consistent to what people have grown used to with the previous design of the icons.
Google finally announced the update on August 12th and explains some of their reasoning. One thing I didn’t realize is that the new Places sub-layer also includes data from the Google Earth Community as well. Not only that, but the Wikipedia layer also checks your local computer language and will show you Wikipedia entries in your language if you are one of the supported 18 languages. I like the idea of trying to integrate the different sources of information. However, if you turn on too many layers in Google Earth at the same time you can get lots of semi-duplicated information. That could be ok. But, I really hope Google puts a lot of attention into the UI for the layers into their next update of Google Earth. There’s great information in the layers, but I think it can be so confusing that many people don’t realize the wealth of information available. And, Google is often modifying the existing layers organizationally and from a design perspective – including the most popular ones – and this causes confusion.
One last thing, I don’t think I mentioned yet – but, noticed last week – that Google added a Summer Games 2008 layer (which is really just a placemark to get you to turn on the layer) under the Places layer folder.