Dutch artist Henk Hofstra has done a couple of interesting large outdoor “urban art” projects. The first is a “Blue Road”. He painted 1000 meters of road in bright blue in Drachten, The Netherlands – on top was the phrase “Water is Life” written in eight-metre-high letters. The road was painted (using 4000 liters of paint) in April of 2007, and Hofstra hoped it would show up in Google Earth – but, the imagery for Drachten in GE is still dated 2005 currently (no new aerial or satellite photo has been acquired by Google for the area). I did notice the artist had some aerial photos taken of the road. I’ve placed one of the photos in a Photo Overlay for Google Earth – load this file

and double click on the placemark to be flown into the Photo Overlay where you can see how closely the photo of the Blue Road matches the road in Google Earth. Try the transparency slider to check the underlying imagery. 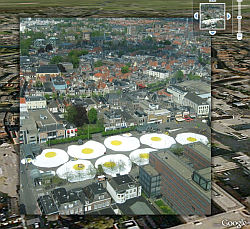 More recently, in May of 2008, Henk Hofstra has done another outdoor art project called “Art-Eggcident”. In this case he has created 100 foot wide fried eggs in a large square in Leeuwarden, The Netherlands. Some of the eggs even have 3D yolks kids can crawl on (see more photos). Amazingly, the city is allowing the art project to stay in place for the next 6 months. We can hope a proper orthographic aerial photo (straight down), or a satellite photo will capture this cool looking art project so it can be seen in the Google Earth images. But, in the meantime, I have again taken one of the aerial photos and made a Photo Overlay so you can see a photo of the Art Eggcident

in its actual location in Google Earth.
This is just a reminder that if you do some large outdoor project you want to be visible in Google Earth. You can always take your own aerial photo and place it with the Photo Overlay or Image Overlay tools in Google Earth. That way it is still “immortalized”.