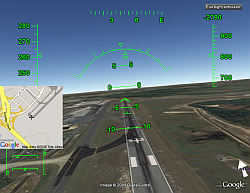 Barry Hunter posted some fun stuff this past weekend for Google Earth’s built-in flight simulator. (If you weren’t aware Google Earth has a built-in flight simulator, then read this – you’ll be amazed!) Barry started with a post at his Nearby blog implementing an ability to give a destination where you want to fly, and he returns a network link which shows a “GPS arrow” in the lower right guiding you while flying to that destination. Simply use his GPS arrow tool, and follow the instructions (you can enter airport designators instead of coordinates). Start flying the GE flight simulator and turn on or off the GPS arrow as you desire (Note: you can bring up the GE sidebar by typing CTRL-ALT-B). It’s really handy for helping guide you to a destination. Naturally, I looked at it and wished for full chart plotting capability. So, I dropped Barry a comment, and a short while later he had come up with a solution! He used the Google Maps static API to show a new Maps view every five seconds as an overlay to show your current position. Brilliant! One little problem is that the Static API only allows a limited number of views per day. So, if a lot of people use this it’s likely to reach the cap. But, maybe Google will think this is cool enough to make it a built-in feature to Google Earth’s flight simulator. Barry also allows you to set different zoom levels for the map. Try Nearby’s Google Earth flight simulator chart plotter here

. A lot of people seem to get lost while flying the flight simulator, so maybe these tools will help.
Other useful add-ons/information for Google Earth’s flight simulator: